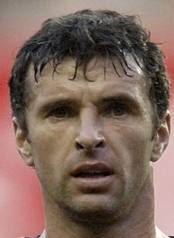 I was flicking through the TV channels at around 12.30 this afternoon when I switched to Sky Sports News and my jaw dropped. The breaking news they were reporting was of the death of Gary Speed at the tragically young age of just 42. I have to say I was in a bit of shock, as I'm sure everyone else was as they received the news.
It seems hard to imagine that someone like Speed should choose to take his own life. Listening to Dan Walker from Football Focus, who spent the day with Gary Speed yesterday, it is truly unbelievable that he should be gone less than 24 hours later. I imagine stories will emerge as to why he should choose to commit suicide in due course, but that is of no concern of mine.
Being English it is difficult, perhaps, to understand the reverence with which he was regarded in Wales. I've just been listening to the usually odious Robbie Savage on Radio 5 Live and he is so upset he can barely speak. Similarly Craig Bellamy was excused from duty by Liverpool this afternoon as he was so deeply affected by the news. Shay Given, a former colleague at Newcastle, was forced to compose himself before the Aston Villa game could start at Swansea this afternoon. Personally I believe that game should have been postponed in the circumstances as there were a number of Welsh internationals involved who couldn't possibly have been in the proper frame of mind for playing football.
I always liked Gary Speed as a player. He was the sort of industrious midfield player that all teams like to have. His qualities on the pitch were similar to those of Ray Parlour. He was tough and combative, without ever resorting to deliberate foul play. In the air he was immense. I can recall a number of times where he would arrive late in the box, or at set-pieces, and plant a header in to the net. As a youngster he was the driving force in Leeds United's midfield that won the First Division in 1992. He went on to be a favourite at Everton, Newcastle and Bolton, before finishing his career with Sheffield United. As a Welsh international he won more caps than any other outfield player in their history.
In the mid 1990's Arsenal would occasionally be linked with Speed. He was the sort of player we were crying out for in a midfield which seriously lacked football ability. In the days when we were watching Jensen, Morrow, Hillier, Selley, Keown etc playing in the middle of the park Gary Speed would have been a much needed addition.
Following his stellar playing career he started to develop this current Welsh international team, the most promising they've had in many a year. He made clear his commitment to the younger players by making Aaron Ramsey his Captain, and the recent results have had the Welsh thinking of realistic chances to qualify for the next World Cup. You can only speculate as to the effect this might have on his young charges.
The loss of Gary Speed is huge for Welsh football. It is also huge for the Premier League, which has lost one of its finest players. Most of all his loss is huge for his young family. It is to them that my heart goes out this evening. RIP.
Posted by DvbrisG at Sunday, November 27, 2011