Put the flags out - Arsenal make a signing! Robin is the new Dennis after all 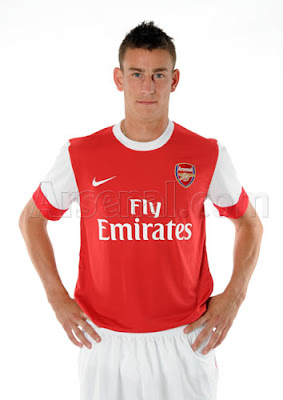 As reported yesterday Arsenal have signed Laurent Koscielny (pictured above) and he will be the new number 6. The fact that he has been given that number would indicate that he is to be Thomas Vermaelen's new partner in central defence, which is bad news for anyone who was hoping for a defender with a track record and/or experience in the Premier League (as I was). You can forget signing Gary Cahill or anyone like that. Arsenal have "revealed" that the new boy has signed a "long-term contract" on an "undisclosed fee." Why do Arsenal feel the need to shroud everything in such secrecy? Are Arsenal fans held in such contempt that they are not worthy of knowing the details of a signing their money has gone towards? Time will tell if Koscielny can cut it at Arsenal and I sincerely hope he becomes a legendary figure at the Club. However, the fact that Arsenal have signed a man with one year in Ligue 1 behind him, with that undisclosed fee reported at £10million, I am very, very worried. Surely we could have signed someone proven for that sort of money? Given Arsene Wenger's record in signing centre-backs (Cygan, Senderos, Tavlaridis etc) I think we will have to wait and see...and hope. Good luck Laurent, welcome to Arsenal Football Club.

In other news it appears that Robin Van Persie wishes to be compared with Dennis Bergkamp. RVP has asked to be given the number 10 shirt vacated by Williams Gallas. Given that Arsenal are not printing any replica shirts with "Van Persie 11" on the back, and that the official website no longer shows him as number 11, we can safely say we have a new number 10.

This, of course, leaves number 11 free for Joe Cole should he become an Arsenal player. I have to say that my previous excitement about this deal has abated somewhat due to the fact that the whole thing is dragging on and on. If, as many rumour-mongers would have had you believe, the deal was tied up then it should have been announced by now. I think it still might be, but it won't give me the boost I was hoping for a few weeks ago.


Holland scraped their way in to the World Cup Final last night with an uninspiring 3-2 win over Uruguay. For a game with 5 goals in it I thought it was a pretty turgid affair with very little good football. When the Dutch did manage to string a few passes together it largely involved a nice touch or two from Van Persie, who will be very much looking forward to trying to be Arsenal's latest World Cup winner on Sunday. Holland also produced the goal of the tournament, for me, from former Gunner Gio Van Bronckhorst.

Tonight it's the turn of Germany, the team of the tournament, to try their luck against Spain. I hope they win, regardless of the Arsenal link with Spain (he who we no longer talk about on this blog) as Germany have been fantastic throughout. Maybe we could sign Mesut Ozil instead of Joe Cole. Just a thought.

There will be little or no blogging over the next 10 days as I am away on holiday. I may try and get something written on Monday, after the World Cup finishes, or if we make another signing. I hope you won't be missing me too much.
Posted by DvbrisG at Wednesday, July 07, 2010