This years group photo from Austria 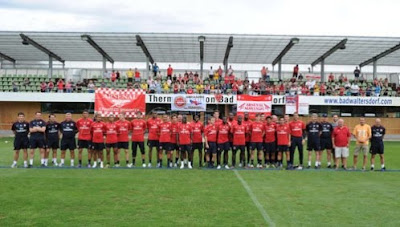 According to a couple of papers today we are again linked to Phil Jagielka, with prices ranging from £10m to £15m. I gave my views on Jagielka early last week when there was talk that a £14m bid had been rejected. I really don't see Jagielka benefiting Arsenal's defence, and I certainly don't think he is worth the kind of money being quoted. Time will tell on this one, but there is certainly a lot of talk pointing in the direction of the Everton man.

We are also told that David James is set to go to Celtic after being overlooked by Arsenal. I am told that James spent transfer deadline day in January at London Colney, but a deal could not be concluded with Portsmouth. I would probably be in the minority, but I would welcome his arrival at Arsenal. This is, perhaps, a sign of our parlous goalkeeping situation - but in the face of signing Mark Schwarzer I know who I'd rather see between the sticks next season. The other goalkeeper linked to Arsenal today is Maarten Stekelenburg. He certainly performed well at the World Cup, but apart from that I know little of him. He clearly knows the highest level of the game, though, and he would be a very reasonable acquisition. The goalkeeper that impressed me most at the World Cup was the Swiss, Botaglio. I thought he was dominant in his penalty area and made a series of good saves. I was watching the DVD from the final season at Highbury the other day and noticed that he played against Arsenal for FC Thun, and very nearly secured them a draw in both games.

With the new rules regarding squad size starting this season in the Premier League, Manchester City are going to have to start clearing out their squad. This could be good news for Arsenal as, among the players mooted for a transfer, is Nigel De Jong. The Dutchman was strongly linked with Arsenal before City paid stupid money for him, just months before they could have signed him for nothing. De Jong is strong and a good tackler. He would complement Alex Song very well in the defensive midfield role - a far better option than the likes of Denilson and the woefully inconsistent Abou Diaby. Will Arsenal sign him? Probably not. But there can be no doubt that a player of his type (I've already stated I would like to see Scott Parker at Arsenal) is desperately required to improve the squad. Other City players on the way out appear to include Stephen Ireland, Shaun Wright-Phillips, Craig Bellamy, Wayne Bridge, Roque Santa Cruz and Jo. I wouldn't be surprised to see Adebayor get kicked out too - and how much would we laugh?
Posted by DvbrisG at Sunday, July 25, 2010