A correction, issues in Bad Waltersdorf, Harry should be on stage, reporters and facts 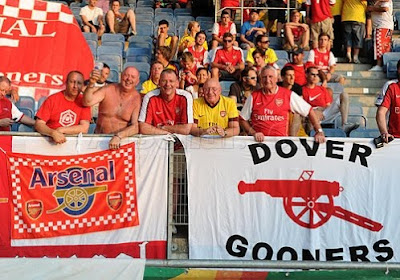 First of all, a correction from yesterday. I stated that the next game in Austria is on Saturday. I was, as usual, talking nonsense. The next game is Tuesday, but the reserves are playing at Welling on Saturday (do they still have the San Siro stand at Welling?)
I was alerted yesterday to an incident among the Gooners in Bad Waltersdorf. Over the past couple of years, more and more Eastern Europeans have joined the Gooners (a bit of a trend, I'm sure you'll agree). These people would be most welcome if they weren't such objectionable, nasty, lowdown scumbags. The incident in question happened on Tuesday when a regular pre-season Gooner had his Arsenal shirt destroyed by a Hungarian who didn't like that fact that the pre-season regulars get "favourable" treatment when it comes to autograph time. The upshot is that Keith (who many Gooners will know from his tattoos and general support of Arsenal all over Europe) has been forced to make peace on behalf of the regulars. The Eastern European fans (particularly those from Hungary) will henceforth be referred to as the "caravan utilising nomadic travellers" (read it closely for an abbreviation).
I was watching Sky Sports News last night and was confronted by Britain's best stand-up comedian. Peter Kay, I hear you cry? No, of course not! Harry Redknapp is the man in question. He thinks that Tottenham can win the League this season, particularly with three new signings. Of course they can Harry...and stop smoking whatever that substance is. I expect this sort of inane nonsense from the knuckle-dragging idiots that follow Tottenham, but from their manager? I must check the odds on him being sacked before Christmas. If that wasn't comical enough, he's in The Sun today saying how Joe Cole "wanted to join Tottenham" and "we spoke a month ago and I was sure he was coming". Of course he wanted to join Tottenham, Harry. That's why he signed for Liverpool. Keep 'em coming Twitchy, this gets better by the day.
I read the match report from Graz on Skytext last night. According to that, Marouane Chamakh set up Arsenal's third goal. Considering he was substituted at half-time this was one hell of an achievement - given that it was Jay Emmanuel-Thomas who actually set it up, the change in skin tone is even more miraculous. The report went on to tell us that Thomas Vermaelen should also have added a fourth late on - again he went off at half-time. Reporters, it seems, have no need to avail themselves of facts. If you read today's Sun you will see a match report by Charlie Wyett, who tells us how well Chamakh linked the play yesterday, including setting up the first goal - watch the bloody game, and stay out of the complimentary press bar! The previous day, Mr Wyett was given to describe our "Czech" goalkeeper, Wojciech Sczeszny - that's the POLISH INTERNATIONAL GOALKEEPER Wojciech Sczeszny. Like I say, don't worry about facts.
More tomorrow.
Posted by DvbrisG at Thursday, July 22, 2010