The long goodbye for Hector Bellerin 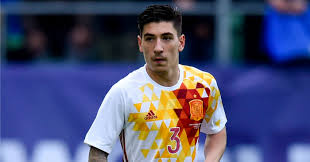 I was worried when I read that Hector Bellerin had made his full debut for Spain at the weekend. I'm now even more worried as he has been named in their full squad for Euro 2016. None of this is to say that he doesn't deserve to be there - if he gets in the side then I predict he will be one of the absolute stars of the tournament. The problem is that we've been here before with a superb Arsenal youngster, ex of Barcelona, spending five or six weeks in the company of the total a***holes that play for Barca and Spain.
We all knew that Fabregas would end up back at Barcelona at some point. What we didn't appreciate was that his place in the Spain squad would be used by that cess-pit of a club to tap him up via the likes of Puyol, Pique, Iniesta, Xavi and, for some bizarre reason, Pepe Reina of Liverpool. Every time Fabregas went away with Spain he had the drip, drip, drip of those players in his ear hole telling him how he was wasting his talent at Arsenal and needed to come "home" to the Nou Camp. I still get angry at Fabregas allowing them to place a Barcelona shirt on him at their celebrations of the World Cup win. It was only a matter of time then before Fabregas caused enough strife at Arsenal to force his way out. The fact that his move back to Barcelona wasn't overly successful on a personal level - despite being involved in a number of trophy wins, he never got ahead of the more famous and experienced midfield players there - will not have any bearing on the future of Bellerin.
I will go out on a limb right now and say that, by the time we get to proper pre-season training the Barcelona media machine will be in action dropping stories about Bellerin. Pique and his mates will be on at him throughout the next five weeks or so to unsettle him at Arsenal. A successful tournament will see Hector become a permanent feature of the Spain squad and so it will begin to turn his head. Like Fabregas he is a Barcelona kid. The lure of a return, despite any public protestations to the contrary, is there for him. Spending time with those w*****s from Barcelona will not be good news for Arsenal. If it doesn't happen this Summer, then next year will probably see Bellerin being properly pursued by Barcelona having been continually prodded by their players in the Spanish team. I reckon that Hector Bellerin won't be at Arsenal when the 2017-18 starts, or at least by the end of the 2017 transfer window. The long goodbye begins now.