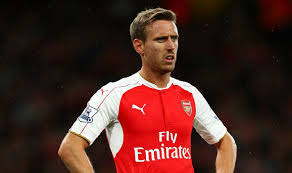 Didn't expect that, did you?

Player Of The Season
I'm sure the majority would be giving this award to Mesut Ozil. His stats for goal and chance creation are outstanding, of course. However, aside from a two month period from November to mid-January he was his usual frustrating self for me. Yes, he was sublime and incredible for those two months, but I like to reward consistency. That being the case I have to go for Nacho Monreal as my Arsenal player of the season. Having improved brilliantly during the previous campaign Nacho has been consistently excellent this year. He tired a bit in the closing weeks and, had Kieran Gibbs been available (no idea where he was for four weeks until Sunday) he might have been left out. However, he was back at his best against Villa and showing why Gibbs' Arsenal future is now in doubt. He must be very unlucky to have missed out on the Spain squad for the Euros, but it looks like Del Bosque is not keen on English based players at all. Well played Nacho, you've been superb. 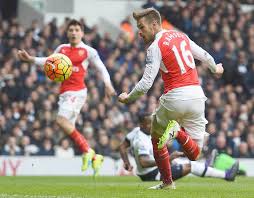 His only fancy flick that worked all season

Most Disappointing Player
This was probably a two horse race between Theo Walcott and Aaron Ramsey (though some would probably look at including Olivier Giroud despite his 24 goals). Theo has been incredibly frustrating since Christmas and should not have had as many appearances (albeit from the bench) as he did. However, the man that really annoys me, and disappoints me, more than any other Arsenal player right now is Aaron Ramsey. I have never seen a footballer with such a misguidedly high opinion of his own ability. He has been living off his stellar season in 2013-14 for too long. Ramsey is painfully slow, though remarkably full of stamina, and his fancy flicks and attempts at impossible passes do nothing but give possession to the opposition. The only back-heel that worked was the one for his great goal at Tottenham, but I don't see how he gets a game in this team so regularly. If he's still here next season he has to improve or be shipped out. 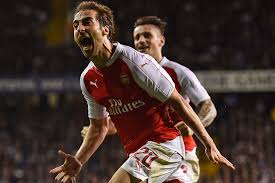 Goal Of The Season
Mathieu Flamini had been almost completely ostracised by Arsene Wenger at the start of the season. The Manager seemed to make it clear that he wouldn't be playing for Arsenal if he chose to stay. Flamini did stay and was as involved as almost all the other midfield players as the injuries took hold. He marked his first start of the season by winning the North London Derby in the League Cup single-handed. Flamini's volley for the second goal at Spurs is my favourite Arsenal strike of the season and it made his presence worthwhile. I'll miss Flamini, a player whose effort can never be faulted. He deserves this award for that fantastic goal against that lot. You can enjoy it again here. Other notable contenders might have been Ramsey's goal at Tottenham, Alexis' pile-driver at home to Man Utd, or Joel Campbell's sliding half-volley versus Swansea. None of them quite beat Flamini. 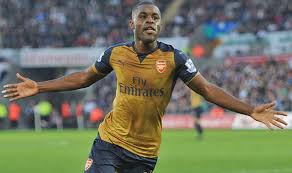 Should have played far more than he did

Most Improved Player
Another player Wenger really didn't want, but had to keep for numbers, was Joel Campbell. The Costa Rican got a terrible slagging after the Sheffield Wednesday game which was totally unappreciative of the fact he was about the only Arsenal player (of the experienced ones on the pitch) who was putting in a genuine shift. When he got his first proper chance away to Swansea he took it with both hands. In the middle of the season he became a more regular member of the match-day squad and I was impressed with him just about every time he played. Campbell has an incredible desire and work-rate. Quite how Theo has been in the squad in front of him these past couple of months is beyond my comprehension. His improvement has been dramatic and I really think he can make it at Arsenal, if only he is given his chance properly. The reaction of the crowd when he was taken off in the Swansea home game shows he is also now a bit of a cult fans favourite. His partnership with Hector Bellerin on the right wing should be developed further. 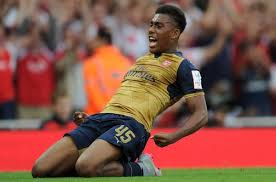 Breath of fresh air when we needed it

Surprise Package
This has to be Alex Iwobi. None of us saw his contribution coming. He had a couple of starts deputising for Ozil in the FA Cup matches, but it was the game at Barcelona where he came to the fore. A shock inclusion, he combined brilliantly throughout with Danny Welbeck, then did the same thing at Everton a few days later. We all like a homegrown player coming through the ranks and I hope to see a lot more of the young Nigerian next season - he looks a real talent, and has shone in different positions on the pitch in the last two months. Well done young man. 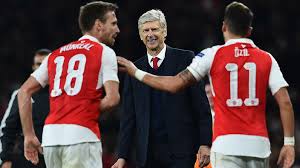 Best Team Performance
Not that many contenders in this category. Rarely has the team put together a top 90 minutes. The Man Utd game at home was great for the first 20 minutes or so as we won the game early on. The Man City home game was good for the way we beat a Title rival. Leicester away was good going forward, but woeful at the back. I could make a case for Barcelona away had we actually scored the goal we should have. So that leaves me with Olympiacos away and Bayern Munich at home. For me it has to be the Bayern home game simply because of the quality of the opposition. It was a rare tactically astute display that Wenger directed and the team played the majority of the game without the ball. They worked tirelessly, rode a little luck, and then hit Bayern with pace on the break. It was also a rocking atmosphere to enjoy it all in too. 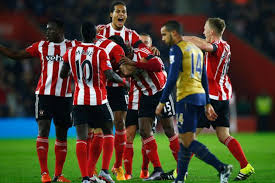 Where it all started to unravel

Worst Team Performance
Similar to the previous category in many ways. Olympiacos at home and Bayern Munich away. Chelsea at home, Man Utd away. Maybe even Sheffield Wednesday. The "winner" for me, though, has to be Southampton away at Christmas. We went in to the game on Boxing Day off the back of a massive win at home to Manchester City. We were five points clear at the top of the Premier League and ready to press home the advantage and move away and win the Title. What we got was an absolute thrashing by a side that had been in abysmal form. It was the first real sign in the league season that the team wasn't going to have what it took to get the job done. They had learnt no lessons from previous defeats to inferior opponents. It was unforgivable really. 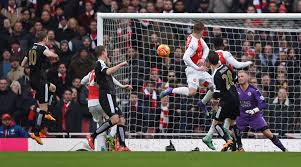 Best Moment
No contest here. It simply has to be Danny Welbeck's winning goal at home to Leicester City. The new stadium has not seen a celebration like this one. At the time it was the goal that should have seen us go on a run that would reel in Leicester. Sadly it turned out to be the high-water mark of our "challenge" for the Premier League. We didn't put any pressure on Leicester thereafter as everything fell apart. However, in that moment when Welbeck flicked home the injury-time winner we knew none of that. All we did know was that we were back in the race and the stadium went totally and utterly nuts for it. Here is the goal again - just look at that crowd! Or, maybe, look at this one instead. It really was the best moment of an ultimately disappointing season.
Posted by DvbrisG at Tuesday, May 17, 2016