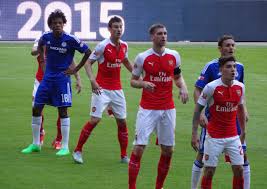 Part two of the squad review focuses on the defenders. It's ended up being another year in which the defence has, at times, looked totally woeful. At the same time some of the individuals who play in the Arsenal back four have done pretty well. Overall, however, the number of goals shipped speaks volumes to the lack of improvement. The whole team actually has a role to play in that, but we still don't dominate our own penalty area due to the fact that not one of our players has the determination to attack the ball properly.

Mathieu Debuchy
There has to be an element of sympathy towards Debuchy due to the fact that he had settled in really well at Arsenal only to suffer two serious injuries. His loss was Bellerin's gain. However, before this season had even started Debuchy was mouthing off about his future instead of getting his head down to reclaim his place. When he did play he was beyond poor as far as I was concerned. In the game at Sheffield Wednesday he was a total disgrace and looked finished. Wenger generously let him go on loan in January to try and get him a chance to play at Euro 2016 but he hasn't made the squad. His Arsenal future looks non-existent.

Kieran Gibbs
In contrast to Debuchy, Gibbo has just got on with trying to displace Nacho Monreal. When he has been called upon he has been as good as ever for the most part and even got a crucial equaliser at home to Tottenham. I am a huge fan of Gibbs and I would love to see him succeed. Right now his position is a difficult one as he needs to play. For me he is still the best English left-back in the country and is certainly better than the two cretins Hodgson has picked there for Euro 2016. I can't see him being allowed to leave Arsenal as we not only need his quality, but we also need his British passport to fill the necessary squad quotas. Next season could easily see him find his way back in to the side.

Per Mertesacker
The senior defender in the squad has seen his automatic place in the starting XI under increasing threat. Clearly he is a very important man in terms of his leadership within the squad but his shortcomings are being accentuated with age. We know he's not quick but his lack of aerial dominance is what most irks me with Per. At the same time he still was able to roll back the years on occasion, most notably at home to both Man Utd and (especially) Bayern Munich. He reads the game as well as anyone most of the time, but even that lets him down occasionally these days as it did with the Costa incident at home to Chelsea. I'm sure he'll be here next season, but he won't replace Arteta as Captain and will be third or fourth choice from now on.

Gabriel
I had high hopes for the Brazilian this season. He looked like just the sort of defender we'd been looking for when he came in during the previous campaign. In the early season he got a chance alongside Koscielny and it was impressive for a little while. He was totally done by Costa and Mike Dean at Stamford Bridge, but that only really endeared him to the fans. The one thing that should have served as a warning to us all, but didn't really, was that everything was done on the edge, or last ditch in some way. You can only get away with that for so long and there have been times when he has failed badly - the goal away at Norwich springs to mind immediately and that wasn't an isolated error. Sadly there is a touch of the Stepanovs about Gabriel at times and he was awful at Old Trafford in a hauntingly Igors kind of way.

Laurent Koscielny
The best of our centre-backs and probably just about the first name on the team sheet. To be fair he's been mostly very good again this season but has lacked the dominant aerial partner he needs to bring out the best in him. Towards the end of the season he wasn't at his usual high standards for me and this seemed to coincide, as my brother pointed out, with him taking on the armband. The fact that he was skipper for the last game of the season, despite the presence of both Wilshere and Cazorla in the side, tells me he is the man who will be the Arsenal Captain from next season and this concerns me. Koscielny is a brilliant player but he isn't, by any stretch of the imagination, a captain. He should be allowed to get on with playing his own game and leave all that other stuff to people who are far more vocal and argumentative.

Nacho Monreal
I made him my player of the season last week because he has retained great consistency across the campaign. Monreal is not a flashy player but he has got better and better in his few years at Arsenal. The fact that he has managed to keep Kieran Gibbs out is a measure of his quality as a left-back. He gets forward and is often part of the attacks, albeit that his final ball sometimes lacks the necessary deftness. When he does get a cross right he is the best source of ammunition for Giroud's main strength as seen against Villa. Defensively you rarely see a winger get past him these days, his positioning is so much better, and he is very good aerially for a guy lacking in height. The problem for Monreal and Gibbs is that both of them can't play at the same time. Next season he has a battle on his hands again, but he can also play very competently in the centre of defence in an emergency.

Calum Chambers
Chambers is on a similar level to Mertesacker when it comes to pace but he is a very good ball player. He seems now to have been settled on by Wenger as a centre-half, though he has also come on as sub to play in midfield and, once Debuchy went, he was the only real reserve for Bellerin - this saw him score a magnificent goal in the FA Cup against Burnley. His chances since Christmas have been suspiciously limited given some of our defensive calamities. For me he should have been thrown in alongside Koscielny in the final month of the season. In the games he did play in the second half of the season I thought he was by far the best of our central defenders. The game against Leicester, where he came on at half-time, was his best performance in an Arsenal shirt - he was aerially dominant against the best team in the country and deserved to be given a proper opportunity at some point thereafter.

Hector Bellerin
A second stellar season in a row from the young Spaniard. He hasn't taken his foot off the gas at all, despite the fact that he's had no genuine competition for his place. I'm glad he's not in the Spain squad as he will get a proper rest but I have to wonder how he isn't - a Spanish defender who can actually defend is a rarity. His pace is astonishing, of course, but he also has incredible stamina - the injury-time run to set up Ozil's goal at home to Bayern Munich was unbelievable. If I was in charge I'd have him working on his crossing for hours on end as there are few things more frustrating to me than Bellerin continually hitting the ball against the legs of the nearest defender. At the same time he can produce passes of the highest quality and his assists stats are right up there, culminating in a fabulous pass through to Giroud on the final day. The only thing that scares me with Hector is the fact that Barcelona will be sniffing around very soon.

Krystian Bielik
I've put Bielik in with the defenders as that is where he has played for the junior teams all season. His only first-team appearance actually came in midfield as a substitute at Sheffield Wednesday where he was one of the few to stand up and be counted. He has grown physically across the course of the season and it will be interesting to see if he gets on the pre-season tour to America. If he does it will be equally interesting to see where he plays - the signing of Xhaka today closes down the midfield avenue so maybe he needs to look at forcing his way ahead of the centre-halves.

Carl Jenkinson spent his season on loan at West Ham and largely did well again up until a serious knee injury ended his campaign early. He was back at Arsenal from that moment and took part in the end of season lap of honour with the rest of the squad. With Debuchy seemingly on his way out I hope Corporal Jenkinson is restored as the understudy to Bellerin just as soon as he is fit enough to play.

As I mentioned above Granit Xhaka has had his signing confirmed by Arsenal today. I'd never heard of him until he was linked with us but it appears he is a combative midfield player with an eye for a pass. I read that he had more fouls against his name than any other player in the Bundesliga this season and that makes him just the sort of nasty b*****d (I hope) that Arsenal need in their midfield. I'll be looking forward to seeing him in the European Championships - I had to pass my tickets for Switzerland v Albania on to my Dad, brothers and nephew as I now have to go to a family wedding on the wife's side that day - they can report what he looks like in the flesh in a couple of weeks time.
Posted by DvbrisG at Wednesday, May 25, 2016