Too much talk and not enough action from Arsenal's players 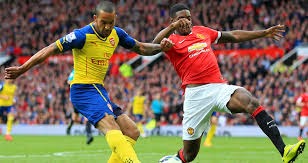 
I'll say at the start of this piece that I've only actually seen the final twenty minutes from yesterdays game at Old Trafford. However, from everything I've heard, and everything I've read, it seems clear that the players spent the majority of the game playing with the wrong attitude again. A lack of application from kick-off left us in a position of weakness that, once we started to play, showed we were a better side than the opposition but left us with not enough time to beat them. Frankly, failing to beat this awful Manchester United side in the league this season is a very poor return - their defence is the weakest I've ever seen from a United team, regardless of the results that David De Gea has managed to get them across the whole campaign.
I regret that I wasn't able to get anything written following the home debacle against Swansea last Monday. But the problem with the performance there was exactly the same. If you only start playing properly after 65 minutes then you lessen your chances to win the game. Throw in our customary poor finishing, unwillingness to shoot, and the absolute fact that the opposition will ALWAYS get one chance to score a goal, then you have a recipe for a 1-0 defeat to a team with half your ability. Since the dismantling of Liverpool the Arsenal players have not applied themselves properly from the start of games. The only exception was Burnley away where we scored early through applying pressure high up the pitch, but then spent the last 80 minutes messing about. At Hull City, the only good performance since Liverpool, it took us until the half-hour mark to realise that we had to play properly to win.
I find this whole phenomenon disturbing. Here is a team that went on a great run, primarily because they pressurised opponents within forty yards of their own goal. By doing so we obtained possession of the football high up the pitch and were able to create chances as a result. It isn't rocket science. Work hard and you'll largely get the rewards for it. Home hammerings of Stoke City and Aston Villa, as well as Liverpool, are all the evidence you need.
Despite naming an unchanged side for the last six games (quite incredibly the first time this has happened under Wenger) this downturn in performance has coincided with Aaron Ramsey playing on the right. I've said before that this doesn't work. We lack pace and Ramsey doesn't do the dirty side of the job by helping his full-back out. At the same time Cazorla has been playing well enough to not warrant Ramsey playing in midfield. Again, he doesn't do enough of the hard yards to assist Coquelin properly in that position. But yesterday, when Cazorla was having a terrible game, Ramsey got shifted and took over the game from what I saw. Could it be that being shunted out wide has given him a kick in the backside? Some of his passing was out of the top drawer, with the ball to Theo Walcott that ended up with our goal being an absolute highlight. Cazorla, in truth, has not played at his best for a few weeks. With the FA Cup Final two weeks away this isn't the time to be carrying passengers in midfield. Perhaps Santi is playing himself out of the Wembley starting eleven.
All of that has drifted away from the main point I wanted to make this morning. Something that has really annoyed me over a long period of time is the habit our players have of talking about what they are going to do, and then doing the opposite. This week it has been Bellerin and Mertesacker promising to "make up for Swansea" and saying "we know the importance of finishing third instead of fourth". All very noble comments, and obviously there is space to fill for Arsenal's media arm. But don't run your mouth with this rubbish and then go out and play like it's some kind of training ground exercise. If you really want to make up for a defeat, or ensure you're not going to need a play-off in August, then go out and do it! Don't tell us what you think, because quite clearly it doesn't translate to the pitch. And it happens far too often. Do your talking on the pitch. I'm fed up of the empty statements.
Of course, thanks to some long overdue good fortune at Old Trafford, we have virtually secured that third place. But we should have now been in a position to be putting out League Cup strength sides in the last two games and protecting everyone else from injury (or, more importantly from the referees) ahead of Wembley. Had we played to a proper level from the off against Swansea and/or Manchester United we could have been relaxing and not needing to get some kind of result against a Sunderland side scrapping for Premier League survival.