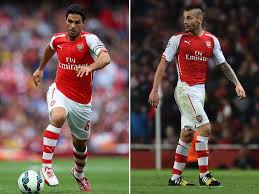 Neither of these players is "fit" for Wembley

I didn't get to write anything yesterday after all. We took the kids to Southend for the day (highly recommended for a family day out) and didn't get home until nearly 10:30pm, absolutely shattered - for people who live with fresh sea air every day it was amazing what it took out of us really.
Not writing meant I couldn't react properly to Arsenal's press conference (I clearly missed my invitation to another media event that saw certain bloggers in attendance) and the pre-match team news. That being the case, I will give my reaction to it now.
It was not a surprise, but no less a disappointment, to hear that Danny Welbeck won't make it for Saturday. Welbeck said a few months ago that the FA Cup was the omission from his medal collection, and how he wanted to put that right this year. It's really sad news for the lad but, if we can get the win, he will surely get his medal albeit not in the way he would have liked. His pace might have been crucial on the big Wembley pitch, especially if introduced against a tiring opponent. His height is also important to Arsenal at either end of the pitch. Of course he has been without much match practice since our last visit to Wembley, and that leads me nicely on to the point I want to make this evening.
I read with interest that Arsene Wenger states Mikel Arteta and Mathieu Debuchy are fit and available, though lacking a little physically. This should hardly be a surprise. We've seen Debuchy just once since the Stoke City game when he played the whole of the semi-final and looked totally off the pace. Arteta has been out for even longer, appearing briefly for the under-21 side on a couple of occasions - I was at the stadium for his last appearance in that team (also against Stoke) and he looked overweight and about two yards slow. That was something like six weeks ago now and he hasn't exactly "featured" in the training photographs on the official website since then. Alex Oxlade-Chamberlain could be viewed similarly, of course, but his 20 minutes last week at least give him some match time in a proper game, and I'm certain he won't start in any case. At the same time, having proved he can do at least 20 minutes he could be a crucial influence from the bench in a tight game. Arteta and Debuchy are simply not fit and shouldn't be in the 18 on Saturday. If they were on the bench they would simply be taking the place of someone else who would be more likely to make an impact, simply because they've played some football. Arteta is the Arsenal Captain and Debuchy, in my opinion, is the best right-back in the squad when he is fit, but this is no time for sentiment. Unfortunately business is business, and our business this weekend is giving ourselves the best chance to win the Cup.
Arsene Wenger worries me with his substitute selections. He has a very long history of picking his replacements based on their seniority, regardless of position on the pitch, or the opponents we play against. Take the Sunderland game a couple of weeks back where we went in to a home game with four defensive players on the bench. Why else can you see a reason for Coquelin, Flamini, Gabriel AND Monreal to be on the bench? Surely at home to relegation fodder an extra striker like Chuba Akpom wouldn't have gone amiss if you were struggling to break them down? It has gone on for years, often at the cost of not putting a younger player in the squad that, at worst, would give them experience of being around the first-team. When he starts talking about Arteta and Debuchy being "available" for the FA Cup Final I can see at least one of them getting a place among the subs and, for me, that is not the right thing to do.
As we're now only two weeks away, and I promised to link to my previous FA Cup Final posts before the weekend, here are the links to 1998, 2002 and 2003 which were originally posted in May of last year. I hope you enjoy them (again). The 2005 and 2014 posts will be linked from here tomorrow when I publish the FA Cup Final 2015 preview. I already have that sick, nervous feeling in my stomach.