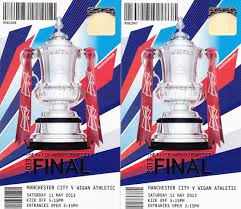 No shortage in the Football League


If you were an Arsenal fan on Twitter last night then you'd surely have struggled to avoid the criticism being (quite rightly) directed at Exeter City Football Club. Via their website Exeter were offering "half" of their FA Cup Final allocation to members of their supporters trust - enter a ballot and they can win the "right" to buy tickets for Wembley on 30th May. Half of their allocation, incidentally, is eight pairs of tickets - half at the Arsenal end and half at the Villa end. So Exeter City actually have 32 tickets available to them for the FA Cup Final!!!
Is it any wonder that the two clubs actually involved in the game have such a limited allocation when quite so many are being given to individual clubs in the Premier League and Football League? You can be certain that the bigger clubs in the higher divisions are getting even more than the likes of Exeter. I realise that I'm going over old ground here to a certain extent, but I admit that I never realised just how many tickets were given to clubs. I'd always assumed it was a minimal number per club, which would still be a minimal number too many, but 32 tickets?! Let's just say, for the sake of argument, that the other 90 league clubs all get just those 32, then they alone account for 2880 seats that should be split between the competing sides - we can safely assume it's at least 4000 (and the rest!) in reality. Given that each year the two sides who make it complain about the allocations provided to them wouldn't it be nice if the professional clubs all stuck together and made tickets available to genuine supporters? Or would that mean a few of their sponsors and the Chairman's wife not getting a good day out in London Town?
Exeter were very quick to issue a statement last night in an attempt (and I use that word advisedly) to justify their allocation and how they decide to use it. Exeter claim that, if they returned their tickets to the Football Association, they would simply be redistributed to another part of the "football family". I don't know whether that's true so I have to take them at their word. What they don't address, of course, is why they aren't giving 16 pairs of tickets straight back to Arsenal and Aston Villa to give to fans who follow them all season. Exeter City go on to state that a number of the people eligible to apply for their ballot are regulars at both St James' Park and Emirates Stadium. Again, I don't know how true that is, but there is nothing in the qualification criteria for their ballot that states you have to reveal yourself as an Arsenal supporter before applying. As weak arguments for doing the wrong thing go this is really right up there.
The simple fact is that Exeter City and any other club, referees association, local league, corporate partner or any other organisation that is not Arsenal or Aston Villa Football Clubs have no right to those tickets, and they are a disgrace for not offering them straight back to the two clubs. I can say this as someone who already has my Cup Final ticket, but I know many people who genuinely deserve to be there and have the right to be there, but who are relying on being lucky in the ballot at Arsenal tomorrow. It's simply not on.
Posted by DvbrisG at Thursday, May 07, 2015