Arsenal in the FA Cup Final? - you wouldn't know it 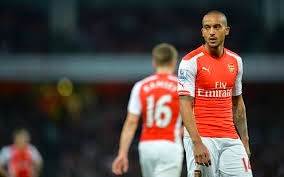 Did I see my last of him in Arsenal red?

I would have liked to get this written last night when I got home from watching England v New Zealand at Lord's, but the traffic on the way home made it a late finish for me and I was too knackered to sit down and write. That being the case I've had to save my Arsenal moans until this afternoon.
Wednesday night was my last home game of the season. I can't go on Sunday because of work but I'm actually not that bothered after the season I've sat through. I had mistakenly thought my last home win came before Christmas because I had thought the lamentable display against Leicester had finished in a draw. Upon checking the results I realise that we actually won that game! However, having missed out on the really good football we played to dispatch the likes of Middlesbrough, Aston Villa, Stoke and Liverpool it has dawned on me that, with the fact we were so awful before Christmas (when I missed just one or two games at home), I have not actually seen Arsenal play well all season in the flesh. Sitting there on Wednesday I could quite easily have been watching the Champions League qualifier against Besiktas last August as the performance was every bit as pedestrian and uninspiring, and was notable mainly for the missed chances of our opponents.
Having written earlier this week about the empty words of the players it was now Wenger's turn with talk of "no more accidents" ringing in my ears before the game. And yet we saw a virtual carbon-copy of the Swansea game, but lacking in the creativity that at least saw us make chances and the opposition, this time, failing to score a winner. It really was utter dross from Arsenal, with Cazorla and Ozil particularly bad and Giroud particularly disinterested for the most part. Only when Theo Walcott came on did we look like we might do something and he very nearly did it all on his own, taking on and beating defenders and getting a shot or two away. I noted how he went to the stands after the game and I think I've probably seen my last home game involving Theo Walcott as an Arsenal player. Basically Theo, with half the ability, did everything Cazorla and Ozil had failed to even try doing. For me there was only him, Gibbs, Koscielny and Ospina that could take any credit from the match. We were dire and Sunderland had four clear chances to win the game in the second-half. I'll go in to it in more detail next week, but Swansea and Sunderland have provided the blueprint for Aston Villa on how a lesser team goes about beating Arsenal.
The performance of so many of the players the other night is disturbing ahead of the FA Cup Final. Too many seem to feel in the comfort zone. In the absence of Danny Welbeck our centre-forward clearly is in that arena right now. You'd think the criticism Giroud's been getting from Thierry Henry (not all of it totally warranted, but much of it uncalled for from an Arsenal legend) might have stung him in to action in recent games but he seems to have gone the other way. Cazorla is now worryingly out of form. And it seems that when Santi is playing badly then Arsenal play badly too. As for Ozil, well I'm on record for a long time now saying what I think about the lazy waste of space. How can an apparently World Class attacking player so often deliberately control the ball away from the opposition goal, thus taking away any chance that he might beat a player or have a shot at goal? If he was sold this Summer I'd be delighted.
We have a week now for Arsene Wenger to get these players focussed properly and back in to form for Wembley. We haven't actually scored a goal (you can't claim Sunday's goal as having been "scored" by Arsenal) in three matches. If that isn't worrying you ahead of next Saturday then I don't know what would. 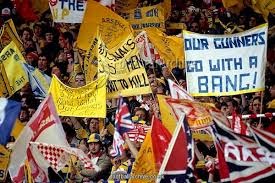 How things should look when you go to Wembley

It's not just the players that seem to be disinterested ahead of Wembley next week. Regulars might recall I was annoyed this time last year with the lack of merchandise and souvenirs on sale at Arsenal for the trip to the FA Cup Final. Well this year is equally bad, if not worse. There is virtually no sign at Arsenal that we are in a Final next weekend. Where are the hats, the scarves, the flags, the t-shirts, the badges etc? I went in to both shops at the stadium on Wednesday night to get my away shirt printed with the FA Cup Final badge the players will wear at Wembley. Shockingly, but sadly not surprisingly, I was told that they had "sold out" of the badge printing. This is a recurring theme with Arsenal's merchandise outlets where anything popular sells out and isn't replaced. The simple laws of supply and demand seem to have bypassed Arsenal's business empire and it has ever been thus. I thought this would be one thing the American owners would get right, but alas no.
Most football fans lament the fact that the Football Association has allowed the FA Cup to be devalued in recent years, and the media have been equally culpable. But now the clubs are just as bad. Arsenal can't complain about the FA Cup being less important when they are treating the showpiece occasion with the same apathy. When I was a youngster going to Wembley was massive for Arsenal and, believe it or not, to us fans it still is.
It's not just the Club itself, however. Even the street sellers have no stuff for sale apart from the obligatory half-and-half scarves. Coming away from the game on Wendesday there was one bloke selling Wembley flags, but even they were red and white when we're playing in yellow and blue! Thank God for The Gooner fanzine which has once again produced Cup Final rosettes for the big day. I'll have mine on, that's for sure.
Posted by DvbrisG at Friday, May 22, 2015