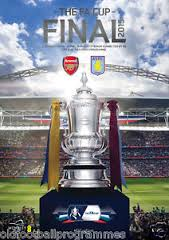 As I start to write this at 5:15pm we are still more than 24 hours away from the actual kick-off. It still seems, and actually is, totally ridiculous that the FA Cup Final will not begin at 3pm. Anyone who watched the BBC Road to Wembley shows this week will have seen the most arrogant, out of touch interview yet recorded with Greg Dyke. Basically football is not about the fans or tradition is the message you can take from it, just so long as TV are happy. In all fairness to the BBC, aside from the late kick-off, they are making a good effort this year to bring the FA Cup Final back to the day of national importance that most of us grew up with.
We go in to this Final as strong favourites, just as last year. In theory there is no contest between two sides that finished at opposite ends of the Premier League. We won 3-0 at Villa Park last Autumn, and 5-0 at home to them in the depths of Winter. But for all that Villa are a team made of the same players, more or less, they are a different and more dangerous group as a whole. This is a one-off game, the FA Cup, and anything can happen on the day. Make no mistake, Aston Villa are not going to Wembley in order to make up the numbers tomorrow. They possess more than enough threat to comfortably beat an Arsenal side that is yet to show they genuinely have the character to perform at their best on the big occasions at Wembley (forget the Charity Shield mauling of  Man City's reserve back-four).
Villa have been given the blueprint for how to beat Arsenal in recent weeks by our games against Swansea and Sunderland. If you can defend properly and remain organised then you can hit Arsenal hard on the break. And make no mistake, if they can keep things tight at the back then Villa have the players to very much threaten Arsenal with pace. I would be amazed if Sherwood didn't line up his side with Delph and Cleverley sitting in the midfield, with N'Zogbia and Grealish wide and Agbonlahor and Benteke up front. Playing against two strikers is another thing Arsenal struggle badly with. Just think of the pace that front four has, with the likes of Scott Sinclair also available, and you will realise why Arsenal need to play so very well to win tomorrow.
The final factor that will help Aston Villa is, surprisingly you might think, Tim Sherwood. The man has been a figure of fun for Arsenal fans since he took over at Spurs last season. We have given him so much stick that it is really due to bite us hard on the backsides at some point. The FA Cup is the perfect place for redemption and Tiny Tim has every chance of making us look stupid at Wembley. Add the other possible FA Cup romance of Shay Given, beaten by Arsenal in his first Final some 17 years ago, finally getting his hands on the trophy and you have the perfect recipe for an upset. Never underestimate the big stories behind the FA Cup - no competition has more of them.
If you want one more thing to be wary of, then it is the referee. Mr Moss is up their with the very worst of them right now and I fear his influence as much as Benteke and co. 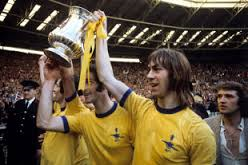 We want yellow ribbons on the Cup tomorrow evening

So that's how Villa might beat Arsenal, but what about ourselves? As I said at the top we are the favourites. Frankly, if we play well we should win. As I said in a post the other day Arsene Wenger has choices to make after Theo and Jack's successful comeback games last Sunday. What does he do up front? For me he should probably go with Giroud as that is the tried and tested. Up against the likes of Ron Vlaar (whose World Cup performances point to a man who performs on the big stage) Giroud will give us more of a physical threat. Also, when defending set-pieces he adds crucial height and aerial ability to the team. Yes, he misses chances, but so does Theo. What he gives us is a player who can hold the ball with his back to goal (when it suits him to be in the mood) and bring the midfield in to the game high up the pitch. We need him to work hard tomorrow, running down defenders as Alexis does. And the same goes for all the players. If we close down the way we can, and the way we have in some important games this season, we will win the ball in dangerous areas - just look at what happened against Liverpool at our place not so long ago.
Another choice comes at left-back. Nacho Monreal has had an outstanding season, but recent mistakes cost us goals in a couple of games and Kieran Gibbs has played the final two league matches. For me I would play Gibbs, no matter that Nacho has played well until recently. Kieran is quicker and can get up and down the line better. Against that possible pacy Villa attack Gibbo's speed could be crucial, as could Hector Bellerin's on the other side of the defence.
In midfield I don't see any change from the Cazorla/Coquelin axis, with the decision in Wenger's mind being who plays wide right. I suspect we'll see Ramsey out there again with Ozil and Alexis the other two. I fear that Coquelin is seriously overdue for a bad game. There is no doubt he has been the main reason for our stronger showings since Christmas, and I hope he has just one more barnstorming display left in him this season.
The final place of much contention comes in goal. If Arsene Wenger stays true to what he has said about "cup keepers" then Wojciech Szczesny will play. Certainly he did so with Fabianski last year, meaning Szczesny missed out. That said, in 2002 David Seaman was brought in for the Final in place of Richard Wright who had played in the other rounds. I suppose it comes down to how he rates the difference between his goalkeepers. Last year there really wasn't anything to choose between the two Pole's. Is there much between Szczesny and Ospina? Until last week there had been no contest, with the defence seemingly much more assured by the Colombian's presence, and Szczesny having made a terrible error against Reading in the semi-final. But against West Brom Ospina looked decidedly shaky. He was clearly at fault for their goal, where his lack of height was alarmingly taken advantage of at a set-piece, and then saw a speculative shot from distance go straight through his hands. It certainly didn't inspire confidence ahead of Wembley - that lack of height could also be crucial in a penalty shootout. I would certainly expect Villa to try and take advantage of it at corners and free-kicks. So Arsene is in a quandary. Either of them could prove to be the right choice, or equally so the wrong choice. Of course it's up to the ten outfield players to ensure it doesn't matter who plays in goal.
If I was picking the Arsenal side tomorrow it would be this:

Clearly that won't be the team as there is no Mesut Ozil in that side for a start. There is no doubt that Ozil will play and we have to hope that he will rise to the occasion, and perform how a £40m signing is supposed to on the big stage. Despite reports to the contrary he has actually done very little of late and he owes the Manager for his continued faith, as well as the fans who continue to back him. Alexis, I hope, will remain the trump card for tomorrow. He hasn't played brilliantly lately either, but his work is crucial to us, and he is maybe due for a goal or two. Let's hope so. 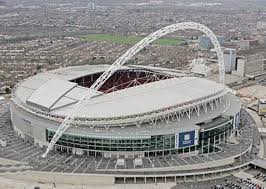 Wembley is the best place in the World to win, and the worst place in the World to lose. We've been fortunate to visit there more than most over the years, and we've had our share of success as well as failure. Say your prayers and hope that tomorrow is one of those successful days for The Arsenal. Let's turn it yellow and support the players all the way, hopefully, to a 12th FA Cup win for Arsenal Football Club.

As promised, here are the links to the posts from the 2005 and 2014 FA Cup Final matches. There will be no post here tomorrow, win or lose, and I will not be doing anything until Sunday evening when I get home from work. Keep those fingers crossed and ask yourself this: