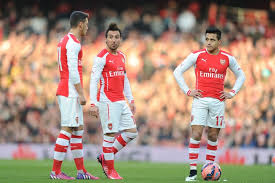 I think I like these three in one photo


That was a really controlled display from Arsenal yesterday. Middlesbrough simply weren't allowed into the game by Arsenal's use of the football and their movement. There was pace in the side, and individual ability. Kieran Gibbs couldn't be tamed by Boro down our left, while Ozil and Cazorla dominated the midfield. Okay it was against a team from a division below, and so a £40m player should be ruling the roost, but I thought Ozil was brilliant at times yesterday. That's two games in a row where, for me, he has produced the goods. Wouldn't it be nice if he started doing the same thing week in, week out, in the games that matter? The acid test comes quickly in a game away at Crystal Palace this weekend, but in the meantime I'll bask in the memory of a totally dominant Arsenal from yesterday. Ozil was superb and long may it continue - he has been given the benefit of the doubt by a lot of people (not me) in his time at the Club so far and he needs to repay the faith shown by a lot of fans and his Manager. Is this the start? Let's hope so, even if his physicality is still far from the required standard.
I was surprised (and a bit disappointed) so see Santi Cazorla named skipper yesterday. I have a real problem with the way Arsene Wenger selects people to wear the armband and yesterday was another such moment. In defence of Wenger there were very few obvious candidates yesterday. Flamini, for his seniority would have been a possibility, and Szczesny might have had a shout were it not for the fact that his own game is under such scrutiny. For me it should have been a choice between Koscielny and Gibbs on the day, and I'd have given the nod to Gibbs simply because he's come through the ranks. It would have been a fine message to the youngsters currently trying to make their way at the Club. I'm sure many see this as a ridiculous gripe, but it's my website and my opinions.
Something that was particularly impressive yesterday was the way Arsenal quickly nullified any threat Middlesbrough might have thought they could pose. We controlled possession, had great movement that ran their midfield and defence all over the place, and closed down really well whenever they had a brief spell on the ball. Boro's strikers simply couldn't get a touch and I really enjoyed Gabriel's no nonsense attitude to heading the ball clear. It was in stark contrast to Mertesacker's style, and that was refreshing. Gabriel also got booked for a Keown-esque foul to stop a Middlesbrough break - a defender who wants to defend? It was a promising start for the Brazilian and I'm looking forward to seeing a bit more of him. Time will tell if he is up to it but he has to be given his chance.
The two Arsenal goals were both excellent, if entirely different. The first was a glorious tribute to Arsene Wenger's preferred style of play. In case you weren't already aware it is worth noting that every Arsenal player touched the ball in the move that put us 1-0 up. The pass from Cazorla to Gibbs created the opening and I was delighted that Gibbo finally looked up and passed to another Arsenal player when in an attacking area - far too often he plays it blind or just whacks it at the legs of the nearest defender. Giroud had a simple task after the great build-up. The second goal, however, was a showcase for what Giroud can be capable of at times. Alexis saw the run and knocked a superb ball over from the corner, but the finish from well in advance of the near-post was incredible. Yes, Boro's players went to sleep, but you can't argue with the quality of the finish.
From then on the game was over as a contest and Arsenal were comfortable until a late chance saw Middlesbrough hit the post. Alexis (who didn't have his best day as far as I was concerned) was denied by a fabulous save, and Theo Walcott missed yet another great chance. But overall you can't be upset with a comfortable win in the FA Cup. We're in the draw for the quarter-final and that was the aim before the match kicked off. I don't much care who we get in the next round, but I'd prefer to avoid Liverpool at Anfield. Anyone else, bring it on.