Needing a miracle in Monte Carlo 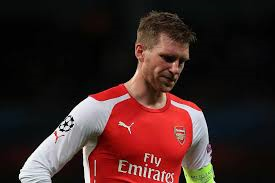 Time to take a seat Per
In the first five or ten minutes last night I thought we were looking good. Three times we opened up the Monaco defence with pace and running and strength. Twice Welbeck might have scored and then Cazorla took the usual ridiculous decision of an Arsenal player passing square when it's easier to shoot in to the corner of the net. And then it all went flat from Arsenal's players. Monaco were able to get on the ball and Mertesacker allowed himself to be pushed around by Berbatov. He was also beaten in the air and, at one point in the second half, beaten in a tackle by Berbatov. Given the way that he knits Monaco's play together it was no wonder that they started to get the upper hand. Imagine the shame of losing a 50-50 tackle to Dimitar Berbatov.
I want to blame the players for last night. Nothing they did was what was required. They have to take their share of the responsibility. But at the same time I can't get away from the fact that the Manager picks them and sends them out to play. His quotes from after the match are astonishing. He states that they knew how Monaco would play to hit them on the break. So why were the mistakes made like they were on the second and third goals? He says that the heart ruled the head for the players after we got our goal back. So why wasn't he off the bench and on the touchline getting the orders out to sit tight at 1-2 behind? Why, at 2-0 down, were we still playing with one striker? Why did he take off Santi Cazorla, the only player (with the possible exception of Kieran Gibbs) to have passed off a decent display last night? As I say, I'd like to blame the players but Arsene Wenger is ultimately responsible. He and the players let us all down last night.
Monaco's three goals all involved Per Mertesacker in one way or another. The first one deflected off him because he is not brave enough to put himself in where it hurts. Time and again I've written here about him turning his back on shots. He turned away last night and the ball flicked off him and wrong-footed Ospina totally. If Mertesacker had simply faced up then the ball would have hit him square in the chest and gone nowhere near the goal. It is scandalous from a professional footballer to play like that. The second goal came from him being, for no reason I can fathom, trying to win the ball fifteen yards inside their half. With both full-backs (yet again) high up the pitch this left Koscielny all on his own against two attackers. Koscielny did the right thing by coming to the ball as it makes the striker have to complete the pass, but Berbatov had the freedom of the borough to make it 2-0.
When Alex Oxlade-Chamberlain scored a super goal to get us back in with half a sniff I turned to my Dad and said "We don't want to go chasing this now". Obviously 2-1 wouldn't have been a good result, but it's a damn site better than 3-1. The Ox gave the ball away again, only to see that everyone bar Mertesacker was upfield. What the hell were they thinking? Monaco had been giving them a lesson on the break all night, yet nobody seemed willing to learn from it. This time they broke and Mertesacker didn't do what Koscielny had done, giving the Monaco player a free shot at goal. Yes, Ospina should have done better (it's only a matter of time before Szczesny is restored to the team), but Mertesacker might as well have gone and sat in the stands. His performance last night was as bad as anything that people like poor old Gus Caesar and Igors Stepanovs ever produced at Arsenal. And all I see today is people getting at Olivier Giroud because he had a nightmare. Yes, he did. But why was he getting the bird, yet Mertesacker gets no stick from people? The time has come for the BFG to go and sit on the bench.
I wrote yesterday that Monaco might not be quite the pushover that so many people seemed to be claiming when the draw was made. Last night they went and proved that totally. Barring a miracle in Monaco we are out of the European Cup at this stage yet again. Something has to change before we can be successful in Europe, and we all know what that thing is. If we do somehow win by three goals on St Patrick's night, and you're in Monaco, get yourself down to Monte Carlo and play the roulette wheel before you hit the Irish bars - you're luck will certainly be in like never before.
Tomorrow I'm going to be writing about the outstanding documentary that Arsenal Media have made about the Invincibles. If you haven't yet seen it on Sky then I urge you to watch it. If nothing else it will ease the pain and anger of last night.