Ozil stands above for Arsenal against Leicester 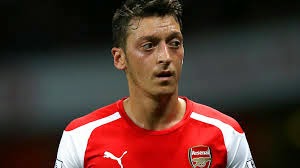 Gave Leicester the eyes with some passes last night
Regular readers will know I'm not a particular fan of Mesut Ozil. I believe he's lightweight, disinterested and afraid most of the time. But he is also a footballer with a range and eye for passing that few other players can dream of. Last night, for me, he played one of his best games in an Arsenal shirt, and we needed him to. Yes, there was one occasion where he turned his back on the ball as it was hit forward by Leicester, and that remains totally unacceptable (if I was Manager I'd fine anyone a weeks wages for that) but so did Mertesacker and Bellerin (twice) on shots at goal. On the ball last night Ozil was on another level to just about everyone else on the pitch - aside from Cambiasso who was the undisputed man of the match for me.
Leicester provided a curious mix of time wasting, heavy tackles (and terrible fouls like the unpunished one that put Alexis on the injured list again - how a guy like Upson, who has had such bad injuries, can make a challenge like that is beyond me), pace, good football, and good and bad finishing. Mahrez looked a real talent, Cambiasso was magnificent in midfield (and it didn't go unnoticed that it was he who demanded the ball be put out for Alexis to get treatment), and Kramaric should have got more than the good goal he did.
The referee was clearly watching a different game to everyone else in the ground. Upson, as I said above, should have been at least booked for the foul on Alexis, and should have already been on a booking by then in any case for hauling the Chilean down by the neck. Bellerin somehow avoided a yellow card despite trying to swap shirts with Schlupp as he ran away with the ball. We weren't given a clear penalty for handball, but then Rosicky was booked for a good tackle. As for the last two minutes when Mr Jones gave two decisions against Olivier Giroud while looking in the opposite direction, well I give up. The first one was bad enough. The second one resulted in a yellow card. Mr Jones didn't see the incident. Come to that, nobody in the stadium saw the incident as it didn't actually happen. Giroud was running away from the ball when Schwarzer's attempted clearance hit him in the back from about six or seven yards away. Apparently being hit in the back with the ball is a bookable offence. Yellow cards can not be appealed. I can only hope the referee assessor in the stands takes appropriate action against Mr Jones. Officiating is getting worse on a weekly basis right now and it is spoiling the game for people who've paid good money to go and watch it.
From an Arsenal perspective our performance was poor for all of the second half. I thought we played some decent stuff at times in the first half, one pass from Ozil to put Theo Walcott in on goal was something from a different planet. We were caught more than once at the back, however, with Walcott giving no cover to Bellerin whatsoever. The closing down that was prevalent in the wins over Man City, Stoke and Villa was missing again. As was Santi Cazorla who seems to have trouble playing in the same side as Ozil. As it was we got a couple of goals, one from a corner that was well taken by Koscielny and one from Theo, again very well taken. I suspect many would blame Schwarzer for Theo's goal, but from the angle I had in the ground the shot from Ozil was moving all over the place and he did well to get anything on it. I want to see more of that from Ozil.
Three points were important after the disaster of the weekend. I'm still taking nonsense from their fans. Why is it that most of the Tottenham supporters you encounter in life are total morons? Not all, but most. Now we have to keep winning. We have a big FA Cup tie on Sunday, and then a tough away game at Crystal Palace. Winning is a habit, and scraping through last night could turn out to be huge. I'll take that at the moment.