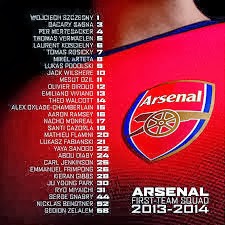 Do they actually exist?

There are fourteen games to go in the Premier League season. We are virtually two thirds of the way through. Arsenal sit on top of the Premier League by two points from Manchester City and Chelsea. They do. Honestly. I just wanted to point it out as it's something that seems to be getting ignored by Sky and the BBC. For a team to be top so deep in to the season, and yet be completely ignored in terms of talk about the Title race, is surely unprecedented.
I watched the City v Chelsea match last night at the Manchester oil fields. Sky had been hyping the game all weekend, with their bubble only momentarily burst when Alex Oxlade-Chamberlain rather gloriously asked who was playing when Sky's interviewer tried to deflect attention from his two goals on Sunday. Don't get me wrong here as I'm all for Arsenal staying under the radar and being the unfancied side going towards the final furlong (while on the horse-racing metaphors I can't believe the press have fallen for Mourinho's "little horse" nonsense from last night). However, the fact that we are being so wilfully ignored is a little bit grating after a while. You would have sworn, both before and after the game yesterday, that we were about to watch the Title decider between the only two contenders. Yet, I repeat, Arsenal are top of the Premier League.
The BBC, for their part, have had Hansen and Shearer writing Arsenal off all season. Arsenal are top of the Premier League after twenty-four games. Shearer keeps saying on Match Of The Day that Arsenal "can't" win the Title. I don't know whether this is because he believes them incapable or whether he's just saying it in the knowledge that, if they do, he'll be ridiculed forever more. The idea that we "can't" win it is utter nonsense. Shearer would be justified in an opinion that stated that Arsenal "won't" win the Premier League on the grounds that he believes City or Chelsea will be better over 38 games. To suggest, however, that a team that is top after twenty-four matches "can't" be Champions is ridiculous.
I'm sure the TV companies, especially Sky, would prefer for Arsenal not to be getting in the way. Sky have become obsessed with the oil clubs and the spending of money, as anyone who watched their coverage of the transfer deadline would tell you. There was actual celebration in the Sky Sports News studio when the total spent in January this year surpassed that of last year. Last night the pre-game build-up included a joyful matching up of the prices of the players on the pitch. This is, as with most of Sky's coverage of football, completely at odds with public feeling. The money is a blight on the sport, not something to be held up as some kind of badge of triumph for the beautiful game. Who needs the self-made Gunners getting in on the act and spoiling the fun for Sky, eh? Perhaps that's why the team who, as I may have mentioned, is top of the Premier League continues to be ignored. Maybe I'm imagining their existence. This sort of thing would make it even better if we could still be top after we play Norwich in game thirty-eight.
Posted by DvbrisG at Tuesday, February 04, 2014