Putting on a show for Dennis 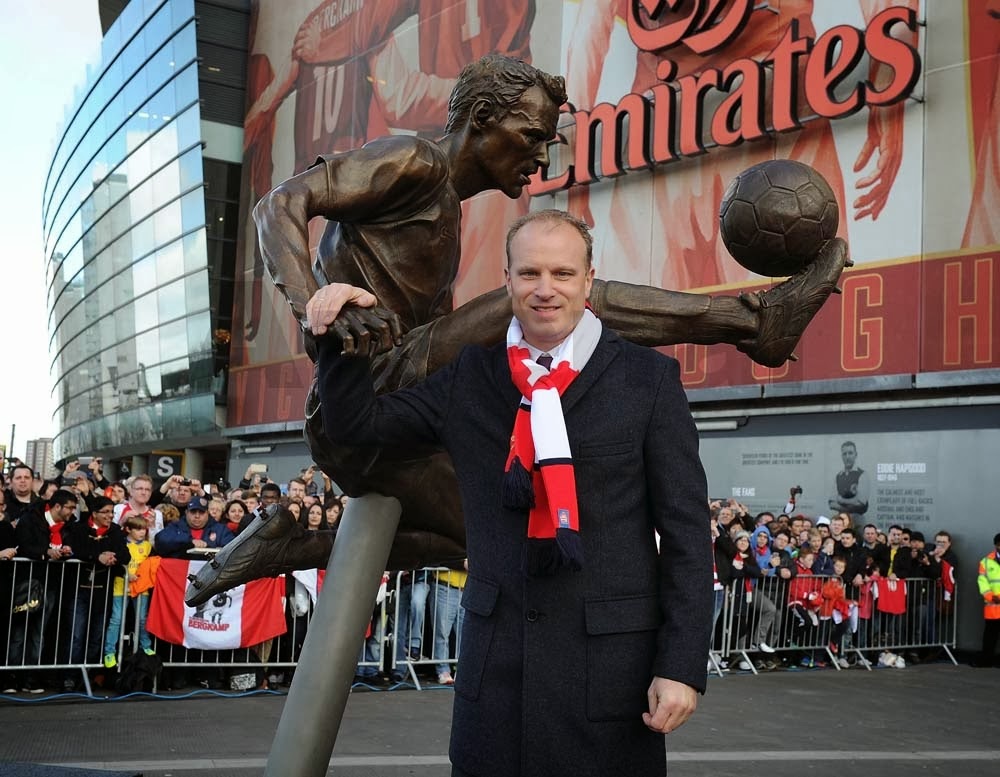 Arsenal made it a great day all round yesterday with that 4-1 win over Sunderland. A nice couple of confidence boosting goals for Giroud were accompanied by a magnificent team goal finished by Rosicky and a towering Koscielny header. We conceded to a great strike by Giaccherini, though I don't know why Szczesny punched a ball away when it was a simple chest high catch. Of course there were a couple of knocks to Monreal and Koscielny during the game, but Arsene assures us they'll be fit for Stoke next weekend. I'm not going to comment on Wenger's claim that Mesut Ozil was out with a "bruised thigh" as it's frankly an embarrassing lie. There's no need to put a dampener on what was a superb first-half from Arsenal and I'm sure the guest of honour will have thoroughly enjoyed it. So let's write about him instead.
I didn't get there in time for the actual unveiling of the statue but from what I've heard there were so many gathered for it that you couldn't see much unless you were at the front. I'll try to watch the Arsenal Player stuff from the ceremony at some point today.
No player in Arsenal's history is more deserving of the honour of a statue than Dennis Bergkamp. He changed Arsenal when he signed for us. His arrival in the Premier League changed English football. Three years ago I wrote this piece  about Dennis. He is quite simply the greatest player in the history of our Club. No foreign player (and certainly no English player) comes close to him in the Premier League era. Bergkamp was that good (or should that be God?)
At half-time yesterday he walked out on to the pitch to a wonderful ovation. It was maybe fitting that the opponents were a Club against whom he scored one of his finest goals. It was an honour to have been in the stadium to witness his return, as it was to watch him play for Arsenal over eleven glorious years. The interview he gave was incredible. I have never known such reverence in a stadium. Every person in there was hanging on every single word Bergkamp had to say and stood in respectful silence to listen to him.
When you listen to Dennis it is clear that he loves Arsenal and he loves England. As he said, his children grew up here, and he had many successes at Arsenal. Bergkamp and his family are not flash in any way. They enjoyed the near anonymity that being here gave them. Henrita Bergkamp and her children (and Dennis' parents) used to walk around outside Highbury on a match day, eating burgers from the street sellers and buying t-shirts with his name and image on them, safe in the knowledge that nobody was going to go bothering them. We serenaded the family in an M4 traffic jam on the way to the 2005 Cup Final with Dennis' song. Their cars were decked out in red and white ribbons and Mrs Bergkamp wound down the window to hear us lauding her husband. It was no surprise, given their feeling for the Club, to hear him say quite clearly that he wants to take up a coaching role at Arsenal in the future. He wants to come home. I suspect he might have to wait until after Arsene Wenger has disappeared as I feel the two men, while having utmost respect for one another, do not particularly get on well. I just hope that Arsene could hear the roar that greeted Dennis' statement of wishing to return and realises what a difference it could make to have a genius on the staff. I'll never get to see my favourite ever footballer play for Arsenal again. That being the case I can't wait to see him back here in a coaching role. In the meantime I'll make do with going to see his statue at every game.