No chance with nine men 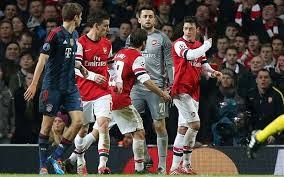 Flamini articulating the views of many

For 30 minutes last night Arsenal went toe-to-toe with Bayern Munich, the best team in the World, and our boys were at least the equal of the Germans. Up to that point we'd been effectively playing with ten men. When Wojciech Szczesny was sent-off we were basically down to nine. I'm sure plenty of readers will say I'm talking nonsense (not for the first time) but Mesut Ozil was so not in the game it was unreal.
Starting with Arsenal's great opening to the game it was a joy to watch. The atmosphere was incredible inside the ground, especially when we all realised that the players had the ability to put Bayern on the back foot. The Germans had no answer to the pace and direct running of Oxlade-Chamberlain and Sanogo. Wilshere and Cazorla were also getting forward and, out of possession, I've never seen little Santi working so hard. With Flamini directing the midfield we were well worth an early goal. We might have got one from open play but for a great save from Neuer to deny Sanogo. Then we had our golden opportunity. I can't have been the only one who didn't fancy Ozil taking the penalty. His miss against Marseille was abject. To see him lining up to try the same thing again was ridiculous. Neuer knew he just had to stand tall for as long as he could. It was another terrible penalty from Ozil. It's typical that we should have the only German without the nerve to take a decent spot-kick. At that moment the level of the players and the crowd dropped a bit. It reminded me a lot of the semi-final 2nd leg against Man Utd a few years ago.
The penalty miss brought Bayern in to the game, but they weren't especially threatening. What was noticeable, however, was that only nine of Arsenal's outfield players were genuinely working hard to disrupt Bayern's play. On numerous occasions Ozil was nothing more than a spectator when Munich had the ball. When we got it and passed it to him he was weak and uninterested in retaining possession. Sanogo would close down Dante only to see Ozil not backing him up by getting in on Boateng or Martinez. This would drag Wilshere out of the defensive midfield area, or force Cazorla to come across from the left. Every time this happened there was extra space for Bayern to get Kroos, Robben or Lahm on the ball. Maybe this didn't come across on TV but it was obvious to just about everyone in the stadium.
The red card was clearly the key moment. It was a penalty, but I would contend whether or not it was a "clear goal scoring opportunity" as the ball had been pushed wide of the goal by Robben and away from danger. Given that we were already effectively a ten man team there was no way Arsenal would be anything other than a defensive sitting duck when reduced in number. This is where Arsene Wenger once again got things badly wrong. There was an audible groan when Cazorla's number went up to be replaced by Fabianski. It simply had to be Ozil that was going off. I've said for months that I don't think Cazorla will be at Arsenal next season and I fear last night might just have been his "Robert Pires" moment - the point at which he knows Wenger doesn't value him highly enough any more.
There's no point in analysing the rest of the match. Arsenal (most of them, that is) defended brilliantly against the World's best football team. Kroos scored a magnificent goal (a carbon copy of his goal against us last year) and eventually a second goal came late on. I felt that 0-1 would have been an excellent effort and given us a real opportunity in Munich. Sadly 0-2 might just be a bridge too far.
Ozil has been the focus of the media after the game. Clearly the ugly part of the game is not something he is keen on. I keep reading that he covered the third most distance on the pitch last night, apparently negating my contention that he looked lazy and disinterested. The fact is that anyone can run. It's no good running to come second with no intention of getting involved. How about his stats for attempted tackles? There certainly weren't any successful tackles. He is the master of dangling a leg and feigning to make an effort at stopping an opponent. In possession (on the rare occasions we got the ball) he was weak and not willing to take a hit in order to retain it. Yes, he was closed down in numbers, but no effort was made to draw a foul. At one point he passed a ball to Arsene Wenger in order to avoid being tackled. Ozil has become a £42m luxury this team can't afford. Nobody is questioning his quality. You'd have to be an idiot to not recognise how good he is. The problem is that he is Arshavin reincarnated at the moment. I can forgive almost anything if there is great effort from a player. Ozil does not give great effort. His earful from Flamini was as overdue as it was welcome. He will probably play on Saturday. I hope he comes out with a point to prove. He's done nothing for about four months now. It's time to live up to the price-tag.
Posted by DvbrisG at Thursday, February 20, 2014