Value for money, A cover up of unbelievable magnitude 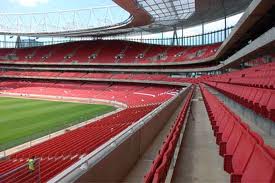 
Finally the internationals are over and we can start to look forward to some real football this weekend. I've written nothing since the Liverpool game as there has been nothing I've felt compelled to write about. Bacary Sagna and Francis Coquelin opened their mouths in the French press, but that's par for the course in any international break. For what it's worth, I don't really see how Arsenal can negotiate a contract with a player who has had two broken legs in less than a year. As for Coquelin, this is the second time he has said things about his future and he really needs to be taken in hand.

I was struggling for some inspiration until last night. I watched the first ten minutes or so of the England game before turning over to the live paint drying on the other side. The only thing I noticed in the England game that grabbed my attention was the advert the FA was running on the pitch side hoardings for their game against San Marino. Given that at least half of the top tier was empty at Wembley last night I couldn't quite believe that the FA was advertising a cheapest seat of £25 for San Marino. If they couldn't get a decent crowd for the match against Ukraine (the strongest team in the group aside from England) what chance do they think they've got of selling tickets for a match with a Sunday league team? It immediately put me in mind of Arsenal's new pricing policy.
There has been a lot made of the fact that prices for some of the big games at Arsenal this year are now more expensive than ever before. Chelsea fans are apparently complaining (and even planning a boycott) about having to pay £62 for the game at our place in a couple of weeks time - the irony being that Arsenal supporters have been having to pay £60 to sit in the away end at Stamford Bridge for a couple of years. Those that choose to pick up on these high prices seem to overlook the fact that, for a number of other Premier League fixtures, there are tickets available at £25 - the same price the FA are charging for people to see San Marino. One or two of the fan groups have criticised Arsenal for their policy as it prices a lot of "ordinary" fans out of attending the big games. That may be true, but it also maybe gives an opportunity for young children to be taken along to other matches as it has been made just a little bit more affordable. I'm not saying I agree with the high prices - that would be nonsense - but I applaud any move that might allow the next generation of supporters the chance to see the boys play.
One other thing is always overlooked when looking at Arsenal's prices and that is the amount we pay for our League Cup tickets. For some years now, since before we left Highbury, Arsenal have dropped prices in line with the idea that a "first eleven" is not picked for these matches (apart from the semi-final with Spurs when our opposition objected to reduced prices in the interests of maximising their revenue). Arsenal charge £20 (£10 concessions) for upper tier seats and £10 (£5 concessions) for lower tier. This represents the most outstanding value for money available at any Premier League club. Last season Arsenal played Manchester City and kept the prices at this low level. The City fans certainly appreciated it as they sold out their large allocation. I don't recall a League Cup match since we moved where the home sections of the ground have not been sold out. If I went to watch my local side I would pay £12+ to stand for their Conference South fixtures. Last year I went to watch Arsenal v Bolton for a tenner (and Ju Young Park even got a goal!)
I will be buying my Coventry City ticket this week as I have managed to secure the night off work. I don't doubt that the ground will be pretty much full, and I expect Arsenal to actually have a pretty strong team out. I would have thought the FA might have looked at such a policy and implemented something similar for England v San Marino. It's not often that Arsenal get something right, but the League Cup ticket prices have been right for a long time.

I wasn't going to write about Hillsborough. It has nothing to do with Arsenal. However, it has been pointed out to me, correctly, that I write about things non-Arsenal on occasion. Another reason I was not going to write about it is that my views continue to be largely the same, despite the revelations of today, and are not popular with Liverpool supporters.
I'll start by saying that the absolution of blame for ALL Liverpool supporters in attendance is not something I agree with. I will always be convinced that the presence of so many people without tickets attempting to gain entry to the ground was the catalyst for the events that unfolded. The failure of the police to deal effectively with this pressure outside the stadium lead directly to the disaster. That is my opinion, and it will not change. I do not apologise for my view, even in the face of what was said today. I know that many other football fans who go to games, and who were going to games in the 1980s, agree with my viewpoint.
There can also be no doubt that the 96 people who died were innocent and I know of nobody who ever believed otherwise. If there is anyone out there who thought otherwise then they need to take a look at themselves. If this latest decision is some small crumb of comfort to the families then it must be welcomed. There are surely grounds for a new inquest to be opened in to the deaths, such is the weight of evidence now available.
What has been revealed today is one of the biggest scandals of modern times. It is now apparent that the cover-up the families always claimed had occurred had indeed happened. Thatcher's government was complicit in the whole thing, and I suspect swept as much as possible under the carpet to protect senior police officers and politicians. Such illegal behaviour, on such a grand scale, can not have been kept quiet without the hands of people with immense power. The politicians and senior police implicated must be brought to book for this perversion of justice. The magnitude and scale of this deception is beyond my comprehension - it was clearly a deliberate and co-ordinated hiding of the truth.
One other thing to consider, and to bring this slightly round to an Arsenal angle, is the fact that it wouldn't have happened had we not all been caged in to terraces across the country. The pressure of the crush would have been relieved had people been able to get on to the pitch. The FA took a dim view of Arsenal's flat refusal to erect perimeter fencing at Highbury. As a result FA Cup semi-finals were not played there for a number of years. We should be grateful for the fact that Arsenal saw their supporters as human beings, and not as animals who needed to be caged. Had Hillsborough been Highbury the disaster simply would not have occurred.

Posted by DvbrisG at Wednesday, September 12, 2012