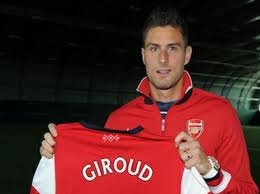 Giroud - hope he can slot one home tomorrow


In September 1995 Dennis Bergkamp endured a tough week leading up to a home game with Southampton in the Premier League. He had failed to score in his first few games at Arsenal, and had struggled to make an impact against Hartlepool in the League Cup in midweek. The press were labelling him "Hartle-fool" and were having a field day. That great sage of football Alan Sugar even claimed that he had bought a far better player than Bergkamp in the shape of Chris Armstrong - the press even seemed to agree! We all know what happened when Dennis got on the pitch that Saturday. Olivier Giroud played for France in the week and was booed off by some French fans before getting a fair bit of stick in the French press. He has also yet to score in an Arsenal shirt. If I was a Southampton supporter I would be finding this all rather ominous. Thierry Henry also got his first goal against Southampton after an even longer wait, and even more headlines about his ability. Ian Wright played his first league game for Arsenal against Saints, and he got a hat-trick. Even Robin Van Persie opened his account against them, but I'm willing to forget that in the circumstances. I hope that Giroud is able to take any chance that might drop his way tomorrow. If he does then he will be in exalted company. If he goes on and has a similar career at Arsenal to those mentioned then he can become a real fans favourite.
The team news for Arsenal is that Wojciech Szczesny is fit and ready to play. Vito Mannone has done very well in the two games he has played, and he has surely moved above the "injured" Lukasz Fabianski in the pecking order. However, I would be very surprised to see Szczesny benched in deference to the Italian. Theo Walcott is also due a test following his illness this week. I see no reason to rush Walcott in to the side after a tough week which will have sapped his strength.
The most likely player of note to be absent is Abou Diaby. I suppose it's no surprise that he has picked up an injury after playing four games in a row for Arsenal and France. Arsene Wenger assures us that the knock is a minor one, and I see no reason to risk his fitness further in a match that Arsenal would be expected to win in any case. We have two big games coming up after the Southampton match, with Montpellier and Manchester City. If he has to miss at least one of the next three games then it may as well be at home to a newly promoted side.
Wenger has a decision to make now with regard to who replaces Diaby. He was the main man in the match at Anfield a fortnight ago, and we don't really have a similar player. I suppose Aaron Ramsey would be favourite to come in, though I would prefer Francis Coquelin to play. More than that I would rather see Alex Oxlade-Chamberlain moved in to the midfield. He has similar ability to run at people as Diaby, and his tackling is probably better. This would mean a place for Gervinho or Walcott out wide and no pace would be lost from the team. It will be interesting to see what the boss does. Laurent Koscielny is also pushing for a start, and probably needs some time on the pitch.
Southampton have looked really dangerous despite losing their first three matches. They pushed Manchester City all the way, and could probably consider themselves unlucky to come up against Man Utd's one man team before the international break. Lambert has certainly looked the part when faced with a sight of goal, and we are definitely due to concede something at the back. The worrying thing for Saints is that they have been opened up a bit too easily at times. With Cazorla loading the bullets they will need to get tight to Arsenal in midfield. If they turn up tomorrow and play as they did against the two Manchester clubs then we will see a really good game, but it could see Arsenal run riot if they get things right early on.
After four weeks of waiting for our second home match of the season I am quite excited about tomorrow. The last time we went four weeks between games at home the break was book-ended by a pair of 0-0 draws. Having drawn a blank against Sunderland a month ago it will be very disappointing and frustrating if history was to repeat itself.