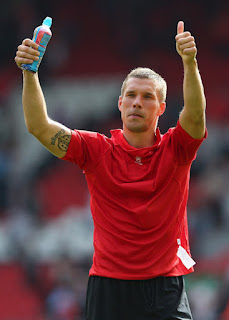 
The World always seems a brighter place when Arsenal win. When they win away at a ground like Anfield then it's even better. I had to watch the game delayed today as I was at work when it was actually going on. My attempts to avoid the result were in vain, so I was able to enjoy watching the whole game back knowing that we weren't going to throw away our two goal lead. It made for quite a pleasant experience after the annoyances of the past week.
I said in the preview how I wanted Arsenal to silence the home crowd as they did at Stoke last week. I needn't have worried on that score really, as I had forgotten that Anfield's famous atmosphere is as mythical as the one at Newcastle. The travelling Gooners were in strong voice throughout the game. We were treated to the full repertoire of Arsenal songs, and I like the new ones a lot. The scousers were pretty much silent throughout, apart from when they were helping Luis Suarez to appeal for more and more outrageous penalty claims as the game went on. In fairness he might have actually had a case on one occasion, but the constant diving and remonstrations with the officials would leave a referee needing to be very brave to actually award him a spot-kick. I think Suarez is a fine footballer, but the constant cheating and rolling around, and the permanent expression of injustice on the face, is beginning to put him in Van Nistelrooy territory.
It was a magnificent performance from Arsenal today. Our midfield was utterly peerless, and Gerrard hardly got a kick. Meanwhile Joe Allen was more than happy to crab his way across the pitch, and Arsenal were more than happy to let him get on with it. When we got the ball, invariably through Arteta or one of the centre-halves winning it through good close pressure, Cazorla and Diaby and Podolski linked up to great effect. The only disappointing Arsenal player for me today was Alex Oxlade-Chamberlain. We all know how good he is, but the youngster must learn the importance of finding a pass - he can't just run at the opposition with the ball every time he gets it.
Abou Diaby won the man of the match award from Sky, and it's difficult to argue with that. It was one of Diaby's best games for Arsenal and the closest he has been to Patrick Vieira. I don't know when he last played three games in a row, but if Diaby can stay fit (I know just how big that if is in his case) then he can dominate midfield this season. Mikel Arteta was also outstanding again, and it is a mark of his professionalism that he is making so much of playing the defensive role in such a disciplined fashion. The most welcome, and surprising, aspect of Arteta's play is the way he has been getting his tackles in. The work of Diaby and Arteta is giving Cazorla the room to play, and today we finally saw what happens when he links up with someone.
I've been saying for the past two weeks that I don't mind the criticism (albeit completely unwarranted) that has been directed towards Lukas Podolski. It's been reminiscent of the stick Dennis Bergkamp was getting when he arrived. Any football watcher that has been doubting Podolski really needs to take a look at themselves. You do not get 100+ caps for Germany, with nearly 50 goals, unless you can play a little bit. The way he got his goal today was breathtaking. You could see when the ball came to him from Vermalen, just shy of the half way line, that Podolski knew what he was going to do. The pass to Cazorla allowed the Spaniard to turn in to space, while Poldi then turned on the after burners to out sprint Glenn Johnson (and he is certainly no slouch). When Cazorla provided the perfect through ball we saw the first touch and finish of a quality goalscorer. You would have to say it was reminiscent of Robert Pires in front of goal. The second goal saw the creative side of Podolski, while any error by the cretinous Jose Reina is welcome in my eyes - he's still getting hit by karma for his Barcelona shirt antics with Fabregas.
I'm sure the media will be looking for a negative and you can be certain they will pick on Olivier Giroud. He will be fully aware that he should have scored again today. The chance he missed late in the first half was almost a carbon copy of the one against Sunderland a fortnight ago. My biggest disappointment in that incident, however, was the reaction of Kieran Gibbs who decided to have a go at Giroud, and then shove the Frenchman for his failure to pass the ball. I hope that Steve Bould pinned Gibbs to the dressing room wall at half-time for such ridiculous behaviour. Frankly, if Giroud had passed the ball when faced with a clear shot at goal I would have been deeply unhappy with him. I won't say that I'm not concerned about Giroud's finishing. The pressure will continue to build on him until he does get a goal, but this is definitely not an evening for getting at a player who gave Liverpool's centre-backs a really tough time. I just hope the goals will come in the next game.
I'm off now to bask in the warm glow of Arsenal victory, and I hope that the latest interminable international break will pass quickly and without injurious incidents for Arsenal players.
Posted by DvbrisG at Sunday, September 02, 2012