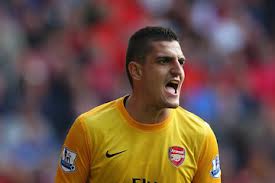 Vito is back in the frame


After his awful errors at Olympiacos last year I imagine Vito Mannone thought his Champions League career had come to an end. Suddenly a combination of Szczesny's injury problems and his own good performances at Stoke and Liverpool have given the man from Bergamo a chance to redeem himself on Arsenal's European stage. I said in yesterdays post how I wouldn't be surprised to see Mannone return in the game at Montpellier. It certainly wasn't a shock to hear that Wojciech Szczesny was not travelling to France today. Mannone has done well when called upon behind this more organised defence, but the memories of his past mistakes are still fresh for many of us. I hope he can continue to look as assured as he has in his last two games until such time as the Manager brings back Szczesny. If Vito gets injured or sent off tomorrow then young, untried James Shea will find himself thrown in at the deep end. I have to say that such a situation shows once again the sheer folly of Wenger failing to add a quality goalkeeper to the squad over the Summer. The players must defend as a team, as they have so far this season, to afford the necessary protection to the big Italian tomorrow night.
Montpellier are the French Champions, though they seem a quite different side to the one that won Ligue 1 last season. For a start we have their leading goalscorer in the Arsenal team. Arsene has been coy this evening on whether Olivier Giroud will start tomorrow night. After Saturday's selection of Gervinho at centre-forward there seems little point in trying to second guess what Wenger will do with his team. Our opponents have struggled so far in their domestic league so a European distraction may be just what they are looking for. Arsenal must be prepared properly and up for a battle. Montpellier may not be on form, but a draw might end up being a decent result for us.
There seems to be a wide school of thought that Arsenal will be much changed tomorrow night. Apparently some players "need to play". Personally I work on the theory that Arsenal "need to get a result" so I don't see the point in change for change sake. I see no reason why Aaron Ramsey or Theo Walcott "need" to get on the pitch. I also see little reason for Andre Santos to get a game at left-back, or to break up the successful Vermalen/Mertesacker axis at centre-half (though it's incredibly hard on Koscielny to be sat on the bench after his impact last season). Each of the players mentioned will get a start next Tuesday at home to Coventry, so what exactly would be the point of throwing them in en masse to an important Champions League match? I'm not saying that Wenger won't make a lot of changes tomorrow, but simply that I don't see how it would be a particularly good idea. I remember a couple of years ago we dismantled Chelsea the day after Boxing Day, only for a much changed side to limp to a poor result at Wigan in the next game. I'm all for rotation of the odd player or two, but to change five or six players from one game to the next is just plain stupid. If I had to make a change then I would consider bringing Abou Diaby back in for Francis Coquelin, but with Man City waiting for us on Sunday I would rather see Diaby held back for that game instead.
I'm hoping that I'll be able to catch the game tomorrow. I'm going to have to try and find somewhere to watch it around Heathrow, so any suggestions for a suitable hostelry are gratefully received. There will be no post match piece on this occasion as I won't be in a position to write again until Thursday. Let's hope we're not ruing a defeat in France by then.