Arsene doesn't want to talk - no problem with that 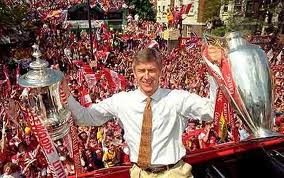 Arsene with the family silver


Arsene Wenger had to answer questions about his future today. Ivan Gazidis has unwisely revealed that Arsenal want the boss to stay on beyond his current deal which expires in 2014. This led to Arsene being asked when he would be signing on the dotted line. Le Boss stated that he was not in the right frame of mind to discuss his future at this point, and I have to say I have no problem with him saying that at all. Wenger also said how he has proven he is an Arsenal man etc etc - you won't find me disagreeing with that as the loyalty of the man towards Arsenal should not be questioned. Many times he will have been offered the chance to move elsewhere but he has stuck with us every time.
I mentioned that I felt Gazidis was unwise to reveal plans to extend Arsene's stay. I say this because I think, after seven years (eight this season) without a trophy it's a little silly to talk about him still being the man for the job two years from now. There are many who want Wenger gone now, largely in the hope that his legacy is not tarnished any further. I am one of those people. That is not to say that I don't hope to be proved wrong. There is not much that would please me more than seeing this Arsenal team recapture our former glories. However, if that doesn't happen between now and the end of next season I really don't see how Arsene Wenger could continue as Manager of Arsenal Football Club. I suspect Wenger knows that too. Since winning the Fairs Cup in 1970 Arsenal has not gone more than eight years without a trophy. If we got as far as the end of Arsene's contract we would be nine years down the road since beating Manchester United in Cardiff.
It's probably fair to say that had a player made the comments that Arsene did today with regards their future then most of us would be up in arms. The difference is that most players haven't displayed the long-term loyalty to Arsenal that Arsene Wenger has, as I described above. Also, those with long memories will be aware that Wenger doesn't like to look too far ahead when it comes to agreeing a new deal for himself. It has regularly been the case in his sixteen years in charge that his contract has been formally extended when deep in to its final year. Wenger is also getting no younger, and who knows how he will feel in two years time?
I think Arsene might not be all that happy with Ivan Gazidis over this. He will not have been pleased to find himself having to field such questions ahead of an important Premier League game. Sadly I feel this is another example of the growing incompetence and unsuitability of Mr Gazidis to be running the business of Arsenal FC. In my view he is out of his depth and is nothing more than a PR man.

I'll preview the Southampton game tomorrow. After no home game since week one it will be nice to get back to London and see the boys in action.