What is there to aspire to? 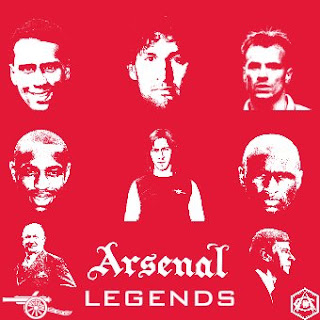 This lot earned their places


I did the stadium tour at Ashburton Grove on Saturday. The highlight was, for me, going in to the Arsenal changing room. I had been in the away one before, when I played at the ground, but getting in to the inner sanctum of Arsene's team was a first.
There were more than a few disappointments to be had on the day, as large parts of the tour were closed off. We could not walk up the tunnel, go on to the pitch side area, or sit in the Arsenal dugout (walking out of the players tunnel is the main attraction as far as I'm concerned). Again, I had done these things before, but my six-year-old had not been in those areas of the ground. The seriously posh Diamond Club was also out of bounds on the day. I found all of this especially annoying as I had postponed our visit by a week as the Arsenal website had indicated the tour was reduced. It made no mention that this week would also see the route truncated in any way. All in all that made it a bit of a disappointment, and I will be writing to Arsenal to indicate my displeasure at yet another oversight on their part.
There was one moment of light relief to be had on the tour (before I finally labour towards the actual point of this post). The new tour involves you being "guided" through the stadium via a headset with commentary from Bob Wilson. When you enter the home changing room Bob instructs you to sit down, before pointing out the various features in front of you. He then draws your attention to a whiteboard, with a football pitch etched on to it. The following quote then comes from Bob; "You might think that this is where the players see all the tactics for the game ahead, but it may surprise you to know that this board has hardly ever been used." Really, Bob? You don't say! Now that is schadenfreude of the very best order, and I suspect Bob (and whoever wrote the script) knew exactly what most Gooners would be thinking when they heard it. It certainly made me smile.
Finally, on to the point I want to make. When you walk in to the "players entrance" area you are met with a number of large, framed photographs of great Arsenal moments. It seems, from the commentary, that an image of the Invincibles team has been replaced by a "49-game unbeaten run" montage. However, there is room for a large photo of this years squad. Why? I don't understand why, in amongst all this glory from the past, there is a picture of a group of players that have achieved nothing. When you then go down the corridor that leads towards the changing rooms and tunnel things get progressively worse. On the walls on either side, at about head height, are a series of photos. The timeline begins in the 1930s with Chapman's all-conquering players and their trophies. We move on down the corridor and find time moving on through Allison's 30s team and Whittaker's team of the 40s and 50s, Bertie Mee's Double team, Terry Neill's late 70s Cup sides, and George Graham's team. Eventually we reach Arsene's great sides of the past. However, this is not where this gallery stops. For some reason, almost half of the corridor is taken up with pictures of the current side. Arshavin is in at least three of them. There is one of Lansbury celebrating his Carling Cup goal at Spurs. Jack Wilshere is a regular face staring back at you from the wall. There is even a picture of the team lining up for last seasons Carling Cup game with Shrewsbury Town! As you enter the corridor, Bob Wilson tells you on the commentary that the players are very aware of the pictures that adorn this corridor, and of the history involved. Given that they are actually in half of them I find that hard to believe. How can this group of players, who have achieved nothing for Arsenal, be given the honour of being pictured alongside the greats from the past? They should be anonymous figures until such time as they actually win something.
As far as I am concerned you should have to earn the right to have your picture on the wall, not just be given it in this way. There is a story that Frank McLintock and Don Howe tell with regards to the walls of Highbury back in the late 1960s. As Captain, Frank had gone and spoken to Don and Bertie Mee on behalf of the team. The players had complained that they felt the weight of Arsenal history, and the pressure to achieve greatness, because everywhere they looked were pictures of the team from the 30s, 40s and early 50s. Howe and Mee told  Frank that when his team won something, then the pictures would be taken down and replaced with the new legends. In short, the players of McLintock's era were given something to aspire to. The challenge was laid down to make yourself part of the glorious history of Arsenal. So, if the current team are already "immortalised" on the walls of the stadium, what exactly is there for them to aspire to? I find it all very annoying, but it is sadly symptomatic of the way this group have been given far too much, far too soon.