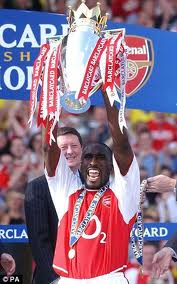 Why on Earth did he leave Tottenham?


I promised on Monday that I would be bringing you a special piece about Arsene Wenger's current transfer policy. That is still coming your way, but two events today have rather superseded that particular space-filler. First of all I was reminded via his children, Melissa, Ryan and Monique (through their Twitter feeds), that today is the birthday of David Rocastle. Secondly, we have had an announcement from Sol Campbell that he has retired from football (in fairness I think most people kind of assumed that happened a year ago).

As regular readers will know David Rocastle is one of my favourite ever players. As I was growing up he was my first hero in an Arsenal shirt. Like most very young Gunners in the early 1980s I assumed that Charlie Nicholas was God in red and white. As I grew to know my own mind, however, my favourite player became The Rock. Every year on his anniversary I dedicate the post simply to the Great Man. I see nothing wrong in doing something similar in celebration of what would have been his 45th birthday, though today I want to write about why he was special to me.
David Rocastle was a special talent. He had pace, power, skill and an eye for goal. He was tough, strong and determined. He would never back down from anyone - just ask Norman Whiteside who found he couldn't bully the young Londoner in what was the spark for the long running feud between Arsenal and Manchester United, which festered until Martin Keown finished it in 2003 (it's often thought that Nigel Winterburn's goading of McClair in the FA Cup was the catalyst, but it was actually the unjust red card for Rocky that set things off). Above all that he was a genuinely nice man. When someone in the public eye passes away we always get the talking heads queueing up to tell us what a good person they were. In David's case people were doing that years before he even fell ill. I implore you to find a copy of a video Arsenal produced during his time with us called "Rocastle - The Rocky Road To Success". In that you will see some of the finest tributes you could wish to hear about this proud, respectful (respected), and excellent family man. I wish I could have got to meet him.
In some ways I am too young to talk with authority on David Rocastle. When he had his peak years with Arsenal I was too much of a child to really appreciate what I was watching when I saw him play, and the need to take those memories with me. I remarked on Twitter earlier as to one of my favourite Rocky memories. It came not with the goal at White Hart Lane in 1987, but around 18 months later in a game at Anfield. Rocky scored a stunning equaliser from the right edge of the box, with one of the most thunderous shots you will ever see. The ball seemed to stick in the side of the net, such was the power with which it was hit. It was not only a great goal, but it marked a change in English football, and the beginning of the end for Liverpool. Earlier in that season, 1988-89, Arsenal had beaten Liverpool at Highbury in the Mercantile Credit Football League Centenary Trophy. The performance at Anfield in the League Cup, however, was what really made us all realise that we were now challengers to the Liverpool dominance. We eventually drew that game (having had a perfectly good winning goal disallowed late on) and would go on to lost the tie in a second replay at Villa Park. But having outplayed Liverpool at Anfield the players knew they were now better than their opponents. The season finished with Mickey getting the Title clincher back in Liverpool, but without Rocky's goal in the Autumn it might never have happened. I think the reason this goal sticks with me so much is that I was allowed to stay up and watch the highlights on Sports Night that evening. A rare treat, thanks to David Rocastle's extraordinary talent.
I cried when I found out that Rocky had been sold by Arsenal. I was on my way to watch Kent play cricket with my friend Pete, and saw the back of The Sun at the train station. I think I hid it well from my mate, but the tears were there at the thought that David wasn't going to be at Highbury when we went back in August. This came after, in my view, his best season at the Club after switching to the centre of midfield. With his good mate Ian Wright up front it seemed we were in for a long and successful partnership between the two childhood friends. Sadly for Arsenal it wasn't to be. Whatever possessed George Graham to sell his finest midfielder will always be a mystery to me.
I've found this rather superb tribute piece to David on Youtube this evening. I don't know why I haven't noticed it before, but the feelings of his peers towards him are clearly as heart-felt as they can be. Happy Birthday Rocky, always missed but never forgotten.

I remember exactly where I was when Arsenal signed Sol Campbell. I was at work and had heard earlier in the day that Arsenal had called a press conference to announce another signing - 2001 was a very busy and very good Summer of transfer activity for Arsenal supporters. It was assumed that we would be unveiling Richard Wright that morning, but he would have to wait 48 hours for his moment. I had been telling people for six months that Sol was coming to Arsenal. The longer his future dragged out, the more likely it seemed in my view. Part way through the morning I decided to take a break and logged on to the internet. I was met on Arsenal's website with the headline - Sol Campbell Signs For Arsenal. At that point the website crashed due to the traffic trying to get on to it, and I could get no more details. Sitting behind me in the office was my mate, and fellow Gooner, Jimmy. I jumped up and shouted "Yes! Jimmy we've signed Campbell!" I don't think he believed me at first.
Signing Tottenham's best player and Captain was all a bit surreal. I couldn't really take it in, and it still hadn't sunk in with me when I went to the first home game that season against Leeds. I got my new gold away shirt printed with Campbell 23, like most other people that year, and it only sunk in that he was with us when I got my first sight of him in the flesh, wearing an Arsenal shirt. In truth he would go on to struggle up until he played back at Spurs, and got that monkey off his back. From then on he cemented his place among the legends.
I can understand why the Tottenham fans despise Campbell so much. However, even the most rabid of them must realise why he chose to come to Arsenal. If they are in any doubt they should remember that he had won the Double by the end of his first season. Sol went on to be one of the key men in the Invincibles. Jens Lehmann can not talk any more highly of Sol in that years end of season DVD. Sol was a leader and a dominant defender at Arsenal. He had success and won trophies. Even if he hadn't turned his back on that lot up the road, which immediately brought him hero status at Arsenal, his ability would have made him a firm favourite.
Sol remains the only Arsenal player to have scored in a European Cup Final. Sadly it wasn't quite enough to bring the ultimate glory. I was disappointed with the way he left Arsenal in 2006. All that had been forgotten when he came back two years ago. That period in 2010 gave Sol a new lease of life. He was absolutely incredible and he carried the Arsenal team through those final months of a season that should have seen success. Sadly nobody else could get up to his standards. It remains a bug-bear of mine that Manuel Almunia was the Arsenal Captain at White Hart Lane that season, when Sol should have led the team. His performance that night should be held as a blueprint for how to play at centre-back at Arsenal Football Club. It was a tour de force that couldn't bring us victory due to the incompetence of those around him. Sol would walk out on us again at the end of the season, and play only eight games for Newcastle - had he stayed at Arsenal he'd have played a whole lot more, and we might just have held on for the Title last season.
For all that his two departures from Arsenal have been odd, it is clear from listening to him that he sees Arsenal as his Club. I would not be averse to seeing Sol back around the place as he does his coaching badges - the more winners and legends that are involved the better. Thanks Sol for all the great memories, and the trophies, and thanks for coming to Arsenal and destroying Spurs in the process. Sol Campbell, Arsenal legend.