Scum is as scum does - and Joey Barton is scum, Come on Bayern Munich 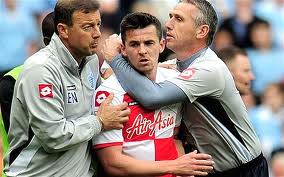 Any mugs out there still want him at Arsenal?


I'll start with an apology, as ever, for not updating things since Monday. The hours I've been working this week have not been conducive to getting time to write properly. As a result today's post may seem to be a little off the pace, but I've had it in my mind since last Sunday.
On Monday 20th June 2011 Arsenal Football Club was heavily linked with a move for Joey Barton. I was disgusted by the idea that Barton might end up representing my Club and putting our Cannon on his chest. I wrote this piece about the subject and said how I would "have no desire to watch an Arsenal team of which Joey Barton is a part." The comments section of that post makes for interesting, and surprising reading. Those that have contributed their view on this blog were far from alone in wanting Arsenal to bring in Barton, in order to add some steel in the midfield. I wonder what those people are thinking right now, following Barton's behaviour last week at Manchester City?
The actions of Joey Barton last week were truly among the most disgusting I've seen. Here was the Captain of a team facing relegation, drawing 1-1 at the Champions-elect, and knowing a defeat could see them relegated. How did their leader choose to inspire his teammates? The man is nothing more than lowlife scum. Were it not for his football ability (make no mistake, Barton is a very decent player) he would be just another Croxteth scumbag serving time in a prison somewhere. Barton is an animal who lacks any self-control whatsoever. The way he lost it last Sunday was just the latest in a long line of violent assaults perpetrated by Barton, both in football and beyond. The look of pure hatred on his face as he stuck his knee in to Sergio Aguero was something the FA should be looking at before they consider allowing him to play football again. How long will it be before Barton maims someone permanently and ends their career?
I mention the FA there, and I do so in the knowledge that they could have (maybe) helped to avert such an incident occurring with Barton. Obviously they have previously missed opportunities to ban Barton indefinitely as a result of his physical assaults on people. Even more recently than that, they failed to deal with him on the first day of this season. Arsenal supporters will remember well how Gervinho was sent off for "slapping" Barton at St James' Park on his debut. Big hard Joey went down like a sack of spuds, whining to the referee that he had been "punched" by our Ivorian winger. This is the blog post from the day after. The reaction of the Newcastle fans to the blog kind of shows that they disliked Barton as much as anyone, but tolerated him as he wore a black and white shirt. I made the point, back in August, that Barton was "out of control." Nine months later, the failure of the FA and referees to deal with this mad man came home to roost. It nearly relegated QPR, though more fool them for signing him in the first place, I suppose.
If I was an R's fan I'd want him sacked - had Bolton got a winner at Stoke he would have relegated his side with his violent behaviour. If Mark Hughes still has Barton on the payroll come August it will pretty much sum him up as a man and a Manager. The FA should take a stand, and kick Barton out for good - before it's too late. We, meanwhile, should remain delighted that Joey Barton never signed for Arsenal.

It's the European Cup Final tonight and that means that we face the prospect of John Terry raising the trophy. Just consider that for a moment. It would mean that Chelsea would become the first London side to win it. Ahead of Arsenal. This artificial, small club with big money, would beat us to the big prize. Anybody that thinks that is a more palatable outcome than seeing Spurs getting the chance to play a qualifier for the tournament next season really needs their head examining.
I have to say I think Chelsea will win tonight. The way their games went against Barcelona has me believing this is their year. I know the game is in the stadium of their opponents, Bayern Munich, but the Germans' form in recent weeks is pretty woeful. Bayern have quickly shown themselves to be chokers as they threw away the Bundesliga, and were destroyed 5-2 in the German Cup Final last Saturday. Defeat tonight would see them emulate Bayer Leverkusen with a treble of runners-up finishes, having been set to win the lot just a few short weeks ago. Let's hope they can rouse themselves tonight, and be inspired by playing the European Cup Final in their own stadium.
Come on Bayern, do it for London!

No blog post tomorrow as I'm off to Lords for the Test Cricket. I'll begin the annual squad review on Monday morning.