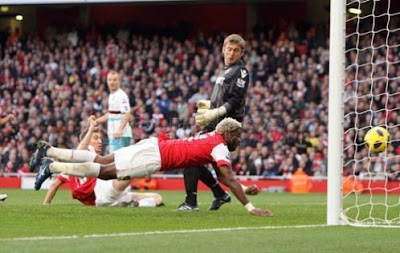 I'll start by telling you that I didn't go to yesterday's game. Having spent most of last week in bed with flu I was simply not up to travelling to London and everything that goes with it. My five-year-old son took my place and, once again, had the time of his life by all accounts - he's been playing his game of football in the hall today, with Theo Walcott making one hell of an impact as a sub, and singing London Calling (though it seems to be a new version mentioning Emirates and Arsenal scoring goals) at the top of his voice! I did manage to see the whole game thanks to the local pub and its Arab satellite system - thank Allah for that.
I felt Arsenal started well, with Arshavin looking more dangerous than he has all season. In the first ten minutes he was running at people and making things happen - then he ran out of puff, again. The Russian's lack of physical fitness is a disgrace in a squad that prides itself on having such staying power over 90 minutes. After that opening burst it was back to first-time flicks and doing anything to avoid having to run with the ball - his dive in the second-half was embarrassing and should have seen him booked.
Despite dominating possession and territory we once again failed to work the goalkeeper for long periods and, going in to the final two minutes of the first-half, Green had only to make one save - a good one from Fabregas. I mentioned in the preview piece on Friday that I feared Green putting in one of his better performances, and so it proved. It seems that he certainly saves his best displays for our ground. As the second-half wore on, and he made an absolute wonder save down low to his right, again from Fabregas, he seemed to be keeping his team on an even-keel.
Samir Nasri's explosive free-kick, with no run-up or back-lift, was an incredible effort but, when it came back off the bar, I said to a friend in the pub that I felt it wasn't going to be our day. When Walcott's tremendous run and shot rebounded off the post, straight into Green's arms, I was absolutely convinced we were not going to get the winner.
I have to give praise to Gael Clichy. I have been particularly critical of Clichy on this site over the past few months, and have given him hell over his crossing. Yesterday the delivery, from both full-backs in fairness, was so much better. It culminated in the best piece of attacking play Clichy has produced in his entire career, showing composure and an eye for a lovely dinked cross with his weaker foot. When Song piled in I hesitated momentarily before celebrating as I was expecting an offside decision (had I been at the game I would have been in line with the goalscorer and known it wasn't offside!) Make no mistake, Alex Song's header might just be one of the most crucial goals we score all season.
When I got back to the car I was just in time to hear the report of the game for Radio 5. I was (though I shouldn't have been) surprised to hear the summariser say that the result was harsh on West Ham. Harsh on Green, yes. Harsh on Parker and the two centre-halves, maybe. But let's be honest here, only one team tried to win the game yesterday, so West Ham ultimately got what they deserved - nothing. This is what's wrong with English football. All the pundits extol the virtues of Barcelona, or Spain, with their attacking flair, and eye for a goal. The trouble is that they're also willing to heap praise on a team that defends for ninety minutes in the hope of a 0-0 draw. Now I'm a fan of good tactical football, with an organised defence - God knows that's how we won the Cup Winners Cup in 1994 - but you can't go on about how you want exciting football, only to praise a team that doesn't try to score a goal.
I mentioned Scott Parker in that last paragraph. What a player this guy is. With Fabregas, and his dodgy hamstring (he is injured again in case you missed his interview after the match - this will drag on all season, as it has for the past 12 months and more) almost certainly leaving next Summer, I would love to see Arsenal line up with Song and Parker, playing behind Jack Wilshere next season. The strength and athleticism of Parker would allow Song to play the more free role he is seemingly developing, while providing a proper screen to the back four. Not many players can put Fabregas in their pocket, but Parker pretty much managed it yesterday. He was on my personal wish-list in the Summer just gone, and he is still there now.
I haven't yet read today's paper, so there's nothing else for me to comment on really. We've got a favourable draw in the Carling Cup and, with a bit of luck, West Ham might dispose of Man Utd, giving us our best chance of silverware in years. I can dream I suppose. More tomorrow.
Posted by DvbrisG at Sunday, October 31, 2010