Birmingham fall out is annoying me, Shakhtar Donetsk preview

Eduardo - back at Arsenal tomorrow 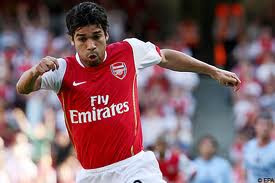 I am getting really annoyed. Annoyed about the way in which Arsenal are being portrayed. I wrote yesterday that I was pleasantly surprised by the media reaction to Wilshere's red card. Whilst I was writing that I was recording yesterdays Goals On Sunday on Sky. I wanted to see their version of the highlights as I had been told about Trevor Francis' reaction on commentary to Roger Johnson's elbow on Chamakh - Francis apparently described it as a perfectly good centre-half challenge, or words to that effect. When I saw that the studio guests were Chris Coleman (whose views I discounted yesterday) and the aforementioned Johnson, I kind of knew where this was going. The highlights were shown minus the commentary (and minus the elbow) with Chris Kamara talking over the pictures. What followed was a dissection of every Arsenal tackle, and the alleged (though proven not to be by television - unless you are on Sky) dive by Chamakh. If you can get hold of a recording of yesterday's show I urge you to watch it and see the pious and arrogant look on Johnson's face. I had to stop watching before they had finished their "analysis" of the game as I was about to put my boot straight through the screen. Apparently they went on to talk (or at least have a good laugh) about the elbow incident. I am sickened by this kind of crap. The presenter is Ben Shepard - late of GMTV - and I urge you all to bombard his Twitter account with your views on the disgraceful TV he served up yesterday morning. To summarise, according to the "panel" Arsenal should have lost Nasri, Eboue and Wilshere to red cards, while Chamakh should have no place in football...ever...the foreign, diving scumbag - you get the gist.
I write this blog to get things off my chest and to make sure I am not bottling-up a lot of my frustration at this very kind of thing. On this occasion I haven't yet reached the tip of the iceberg with my anger. I find it so annoying, and so frustrating, that as soon as Arsenal players do something even remotely wrong, the Man Utd/Chelsea loving branches of the Murdoch media jump up and down and make out we are dirty hypocrites. They can all just sod off and die as far as I'm concerned.
Tomorrow night we will be privileged to witness the return of Eduardo (how topical) to Arsenal. When he was sold a few months back I wrote about how I felt cheated over the Croatian. I genuinely believe that Eduardo would have gone on to be a great of the Club, but for the injury. His finishing was so natural, perhaps even better than Ian Wright when he saw the goal in front of him (and even behind him on some occasions). Last season, however, his state of mind seemed to be wrong. The psychological effect of having his leg smashed (McCleish should read that phrase before comparing the Eduardo incident with Saturday's tackle) got to him, in my opinion. We were already aware that Eddie was struggling physically, with niggling injuries stopping any run of games for him. The problems in his mind seemed to start, for me, in the North London Derby where he missed twice in one-on-one situations, seeming to bottle it as the challenges were being made. He was never the same and the move in the Summer had to happen. We will never get to know just how good he would have been for Arsenal, and that makes me even more angry. Tomorrow night Eduardo will get one hell of a reception, and it will be fully merited for a man who might have been a legend. I would not, for once, begrudge the opposition centre-forward a goal, as long as we are 4-0 up by then!
The team news sees Fabregas return to the squad, "fully fit" according to the Manager. It must have been some 48 hours since the game on Saturday where he wasn't fit enough for the bench. Wenger says he doesn't know yet who will start - I bet he does really. If he doesn't then there is something wrong. He might be tempted to keep Fabregas back for Saturday, but the next game is the most important for me, and the next game is tomorrow night. Go out there, get it won, and then rest the necessary players by taking them off. I can see one or two changes being made from Saturday, and here is how I would like to see them line up:
Fabianski - Eboue, Squillaci, Djourou, Gibbs - Denilson, Wilshere, Fabregas - Nasri, Chamakh, Walcott.
What I would like to see, and what we will actually see will be different - Song will probably play ahead of Denilson, and Arshavin instead of Walcott. We will see.
Next post will be some time on Wednesday, with a review of the match and, hopefully, no more crap from Birmingham.