Rambo in training, early team-news, Rooney angling for a move

Aaron Ramsey - I hope we can see this celebration again soon 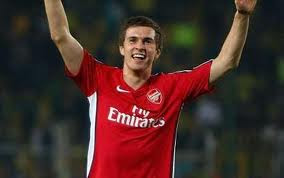 Eight months on from the GBH inflicted by Ryan Shawcross, Aaron Ramsey is back in training. The Welsh teenager is targeting an unspecified date in November for a return to playing. I will be keeping my fingers crossed for Aaron, and hoping that he is not plagued, in the same way Eduardo was, by continuous niggling problems. Whilst it is great to hear that he is in training, I will not be putting out the flags just yet. I have never known any player to come back properly from a such a horrific break - let's just hope that he bucks the trend. Best of luck boyo.

In the team-news for Saturday we are told that Fabregas and Almunia are "nearing a return" but not for Saturday. I am really surprised to hear that Cesc is still not fit - this is quite confusing considering that the man himself was on Twitter last week saying that the Chelsea game was just a couple of days early for him. I hope there is nothing sinister going on with regards Fabregas and his future - he has also been talking about Barcelona again. Elsewhere Sagna and Vermaelen are "10 days away." Of course they are. Meanwhile Theo Walcott and Nicklas Bendtner are "in contention" for Saturday (all of this is according to www.arsenal.com). If Bendtner appears on Saturday then I never want to hear about the importance of pre-season matches for fitness ever again. I will be doing the regular pre-match preview tomorrow.

I don't have a lot of interest in Manchester United, as you can imagine. Nor do I have a lot of interest in Wayne Rooney. However, I am intrigued by Rooney's decision to tell the World that Ferguson is a liar. Most of us had probably surmised this at some point, but it's always nice to be proved correct. There is no doubt that Rooney has been seriously off-form this season, and I think most people had put it down to his personal problems, or Ferguson's claimed ankle injury. With Rooney coming out today and saying he had no such injury I get the impression that he is actually not happy at Old Trafford anymore - and he is now actively looking for the exit door. It does not pay for any player to cross Alex Ferguson - just ask David Beckham, Jaap Stam and Roy Keane. It doesn't matter how big a star you might be, Ferguson will not have his authority challenged. Even the thickest of footballers, and their advisers, will realise that is the case, so the only conclusion to be drawn is that Rooney is deliberately forcing the hand of his Manager in order to secure a transfer. If and when it happens, you know where you heard it first.

More tomorrow morning, before a horrible evening at work. Looking forward to Saturday a lot now.