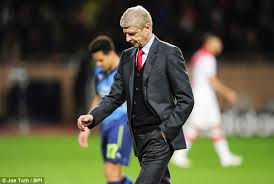 Never trust a man in a sharp suit

If I was disgusted with Wenger and Arsenal yesterday I am apoplectic this evening. What has been revealed this afternoon is totally beyond my comprehension. The actions of Arsene Wenger, in going out and lying to the fans the way he has, make his position as Manager of Arsenal Football Club totally untenable in my view.
Last week Wenger sat in front of the media for his press conference and announced that Danny Welbeck was "progressing well" and would be back "after the international break". He also told us that Jack Wilshere is not far behind him. Today Arsenal FC has released a statement saying that a decision was taken last week to operate on Welbeck's injured knee and that he will be out for a long time still to come. There is no doubt, there can't be, that Arsene Wenger knew how long Welbeck was going to be out and that he sat there and he lied about it. The reason for the lie is obvious as he never had any intention of even trying to buy a striker before the end of the transfer window, but he knew the pressure to do so would be intolerable if this operation had been made public.
The arrogance of Wenger is there now for all to see. Gary Neville, sadly, hit the nail on the head last week with some of his comments about Wenger's personality. How single-minded do you need to be to do what he has now done? We are now playing most of the rest of this season reliant on a man, in Olivier Giroud, who had his leg broken by the ball last year - not the most solid foundation, is it? To sit there and blatantly lie to the fans, the people who invest their time, effort and money in our Club, is beyond anything that is remotely acceptable. If a Government Minister sat there and told such a blatant lie, only to be found out within a week, they would be bombed out. I spent ten years as a Trade Union representative in my workplace and I always told my members not to expect me to defend the indefensible - what Wenger has done is totally indefensible. Leave aside, for a moment, the fact that we have one centre-forward worthy of the name and consider the way that he felt able to sit there and tell bare-faced lies. It is disgusting and it makes me feel physically sick.
None of this is to say that Danny Welbeck is the answer to our prayers. I dealt with the issue of a lack of goal scoring ability in the squad yesterday. Welbeck is a very good footballer but not a top striker. Having said that, we're stronger with him available than we are with him sitting with his knee strapped up. And while I'm on the subject of his knee, how on God's Earth does it take Arsenal's medical department five months to decide he needs an operation? This is a player we were told was "available" for the FA Cup Final (another Wenger lie, no doubt). And this is not the first time. Tomas Rosicky and Jack Wilshere have both sat injured for months on end before it was decided an operation was needed to sort out the problem. Who are these idiots and how much are they being paid? Christ, I'd have had my knee fixed quicker on the NHS!
As you may have guessed I am absolutely livid as I sit here and write this. One thing on Twitter, however, has lightened my mood a little this evening. Until recently I had never seen an image of the outside of the original East Stand at Highbury. Not many people had. I had always assumed it was nothing more than a basic wooden, with a bit of iron support, structure. Below is one of the rarest of Arsenal images showing the original stand and the North London masses turning up to a game against Aston Villa in 1934. As you can see, even the original stand looked magnificent from Avenell Road and was almost as grand as the wonderful art-deco replacement. It is one of my favourite ever Arsenal images. Enjoy. 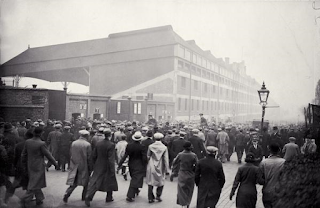 Nowhere ever had the same class as Arsenal Stadium, Highbury