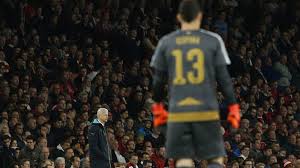 
It may seem like I only write stuff when I get the chance to have a go at certain people. I can assure that this is more by chance than design. I haven't been able to go over the Leicester City game as I've been working since Friday and simply didn't get the time to comment on a nice away win. I did say to my Dad (who went to Leicester) that our defensive issues are massive following that game. I really didn't expect those problems to manifest themselves quite so obviously against dross like Olympiacos last night. As I'm now off work until Monday I have plenty of time to get in to the problem at Arsenal and it will come as no surprise to see me directing my anger at one person.
I said after the Zagreb game that I couldn't understand the logic of leaving out Petr Cech. It has never happened in the past that the first-choice goalkeeper was rested from Champions League group matches, unless we were already through/out. The fact that it had happened in the first game made it clear that it was going to happen again last night. It was stupid in Zagreb, and it was shown to be stupid last night. Petr Cech makes mistakes, as we all do, but why tempt providence by playing Ospina? If Ospina was the answer to our woes then there would have been no need to sign Cech in the first place. The arrival of our new goalkeeper was surely an admission that neither Ospina nor Szczesny were up to the job of playing for Arsenal at the top level on anything approaching a regular basis. To hear Wenger say that he basically promised Ospina he would get to play matches sums up what a terrible "leader" our Manager has become. You begin to wonder if maybe Cech wasn't signed by Wenger at all, but by a Board who realised there was a problem that needed sorting out and they could get a top class goalkeeper in at a low price. I read earlier a snippet from the new Gooner fanzine citing the way Arshavin was treated by Wenger having been signed above his head, so to speak - remember him being left out at Wembley for the FA Cup semi-final and then being constantly played out of position? I digress.
Clearly David Ospina is going to get some serious stick following the second goal last night, but that is nothing more than scapegoating the goalkeeper. The fact is that Ospina shouldn't have been on the pitch to make that error. He did the exact same thing at Tottenham last week and was fortunate that he happened to be two yards off his line at the time. It wasn't Ospina's fault he was playing. Arsene Wenger sent the team out with Ospina in it. He can't be faulted for being told to go and play last night. It is convenient for those that would choose to defend Wenger to blame one (or more) of his players for letting him down. After all, it's always the referee or the players isn't it? Anyone but their demi-God Arsene. Wenger himself sat there in front of the press refusing to answer questions and then blaming "bad luck" for the defeat. When you start putting these embarrassments down to ill fortune then surely the last of the straws is finally being clutched.
Arsenal have conceded three goals at home in Europe against Anderlecht, Monaco and Olympiacos in the last twelve months. It's hardly a list of the European giants. Each of these games has seen some of the most rank bad defending you will see from an apparently decent football team. How can Steve Bould sit there and continue to take his wages? Either he's not allowed to coach the defence properly, in which case he should have some pride and quit, or he's simply not up to the job. Either way things are not getting any better. As I said at the top the warning signs were there on Saturday (and they have been all season in truth) yet nothing is done about it. Again, I come back to Wenger. Do they do any training on organisation at the back? The answer must clearly be no. You might get away with that domestically when you have Vieira, Gilberto, Pires, Bergkamp and Henry in the side, but even they couldn't get over the line in the Champions League. When you've got Ramsey, Cazorla, Ozil (waste of space), Walcott and/or Giroud it doesn't seem quite so high on quality so even the domestic league is something we are incapable of winning. The way things are, Alexis Sanchez will leave Arsenal at the end of this season. I am totally certain of that.
I had a clown on Twitter late last night blaming the fans for this latest capitulation. Apparently the match-going supporters had created a negative atmosphere. Is it any wonder? When you're paying big money the least you are entitled to expect is commitment and basic competence against second-rate opposition. If the Manager and his players don't deliver that then they can't expect the crowd to be happy. Make no mistake, Wenger is to blame.
I'll leave you with the fact that, having gone 3-2 down in the 66th minute, he waited until the 86th minute to introduce Joel Campbell to the pitch. Campbell is a centre-forward (he destroyed Manchester United in the Champions League two years ago) who has never been allowed to play there for Arsenal. Wenger clearly doesn't have any faith in him as a player (he wouldn't have waited that long to bring on Giroud/Walcott, for example), yet apparently he couldn't find anyone in the transfer window that would have been an improvement. Still want to blame the players, the referee, the fans or bad luck?

Posted by DvbrisG at Wednesday, September 30, 2015