The big Arsenal rip-off continues, Some thoughts on Debuchy 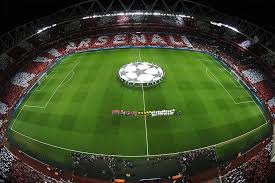 Spectacular, but it'll cost you to see it in the flesh


Given that Arsenal failed to spend any money in the transfer window the Club has shown just how much contempt it holds for us all with the announcement that the Bayern Munich home match in October will be charged at "Category A" prices. I suppose that massive amount of money in the bank doesn't just grow itself so Arsenal have decided to cash in further by smashing us in the wallets for a group game in the Champions League. I can just about understand making a quarter-final against one of the European giants a Cat A, but a group match?! It seems that the greed on display in the upper echelons of the Club really does know no bounds.
With it being a Champions League match Arsenal can be fairly assured of the game being a sell-out. Those supporters with a season-ticket have no choice as the game forms part of the seven cup-ties included in the cost, though I'm fairly sure that the additional cost that comes with a Cat A price will be added to the up-front price for next season (assuming there are no refunds due to not playing all seven home cup matches - normally these are Cat B). Thousands of tickets for Champions League matches are given over to the corporate sponsors of the competition, as well as those to UEFA for whomever they are choosing to schmooze - a game involving Bayern Munich in the city of London will not be short of takers there. The Bayern fans are likely to travel in numbers as per usual, though being German they are more than capable of actually organising a boycott based on the prices being charged. Add in the tourists, and the touts who are almost undoubtedly well "in" with the Arsenal Box Office, and you have a perfect recipe for Arsenal to charge whatever they want.
The annoying part of this is that it is all so unnecessary. There seems to be no question asked at Arsenal when it comes to upsetting their own supporters. I suppose we are our own worst enemies in that we will turn up, no matter what. From my point of view I don't agree with boycotting any games as I want to support the players - it isn't their fault. Also, being a season ticket holder, I've paid up front so I would just be throwing good money after bad and cutting off my nose to spite my face by not turning up. But it is clear that as long as the tickets sell then Kroenke's men will keep adding to admission prices whenever they want to. It is, after all, the going rate just so long as people are still paying. If only they would apply the same logic to buying new players whereby the seller is the one whose valuation is all that matters.
I read Mathieu Debuchy whingeing the other day about not being first-choice at right-back, and how he had considered asking to leave. That's not exactly the spirit we might want, is it? As it happens I would rather see Debuchy playing than Bellerin as I believe he still a better defender at the moment. Bellerin's pace can get him out of trouble more often than not, but his lack of positional awareness (which will get better as he learns more) can be exposed by better players, as it was by Coutinho the other week. I also think Debuchy is a decent player on the overlap, as well as being an asset in the air at set-pieces at either end of the pitch. He is also much stronger physically. All in all I think Bellerin could learn a lot from sitting on the bench for a while and watching Debuchy play. However, what sort of character is Debuchy if he wants out at the first sign of a youngster challenging him?
Debuchy was very unlucky last season. He had settled in very well before a freak injury against Manchester City put him out for a couple of months. He then came back and settled in famously once again, only to be put out by one of the more cowardly challenges of last season against Stoke City. When he came back for the FA Cup semi-final he was clearly unfit and had to play 120 minutes at Wembley while appearing completely out of sorts. Meanwhile, after Chambers had failed his audition, Bellerin had been parachuted in to the side and made a great impression, improving immeasurably from his difficult beginning at Dortmund. Unfortunately that kind of bad luck can happen to anyone, and it happened to Debuchy. But I fail to see how he thought he might simply walk back in to the side this season, regardless of me thinking he should be playing.
I want players who will fight for their place, not give up and want to go somewhere else at the first sign of a problem. I fully understand that he needs to play if he is to be sure of a place in the France squad, but he clearly doesn't have much faith in his own ability if he can't see himself getting back in after just a few games. Bellerin is bound to have a dip in form at some point. He might end up getting unlucky with injuries (we play Stoke this weekend, remember) and Debuchy would be back in any case. But if Debuchy doesn't have the heart I'd rather see him ditched, and the sooner the better.