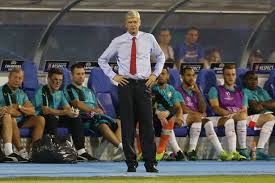 Idiot
I knew we were in trouble last night as soon as I saw the team that had been announced. I haven't got much of a problem with resting a player or two. The whole rotation thing is the modern way and we should be able to handle the odd player being left out to have a breather (though quite why anyone needs a break in September I have to wonder). To change six players is madness. We've seen this happen before and it has always ended up in a negative result. I remember Arsenal beating Chelsea at our place over Christmas a few years back, only to go to Wigan with a totally different side a few days later and not get the result. Quite simply it is too many changes at once. We are also in to the realms of keeping people happy by playing them - there can be no other explanation for David Ospina getting a game ahead of Petr Cech. Ospina did nothing wrong on the night, but there was no question of playing the "cup" keeper in the Champions League last season. Cech certainly doesn't need a rest.
Olivier Giroud looks like a man carrying the weight of the World on his shoulders. I personally believe his confidence has been shot ever since Thierry Henry opened his mouth about him earlier this year. This set the fans off and he's been struggling ever since. It can't really do you much good when the greatest goal scorer in the history of your club and your country gets on your case for no reason. It all came to a head last night with a ridiculously bad performance (bar one header that was brilliantly saved early on) in which he was clearly not in the mood to play football. I have no complaints over the sending off. The first one was stupid - you don't get away with those kind of histrionics with a European referee, and the second one was a yellow card all day long for a lazy foul. As we were already 1-0 behind by then it bordered on criminal from Giroud. He's probably lucky that the tunnel was about 50 yards in front of the away section so he didn't get the full force of the abuse he deserved from them.
The first goal was a defensive disaster. In the absence of Coquelin we saw an Arsenal back-four totally shorne of their protection. I like Mikel Arteta a lot. He's been a fine servant to Arsenal and is a fine player, but his legs went two years ago. To ask him to play in Coquelin's position is to ask for trouble. He was always a yard behind the play, never in a position to make the tackle. Debuchy followed his winger in to the centre, but then failed to pass him on to Gabriel, which meant he was tucked in too tight behind his centre-back. Gabriel himself had dropped a yard behind the other three defenders, playing (just) the full-back onside as Oxlade-Chamberlain, not for the first time, failed to do his job in tracking the runner. Ospina produced a fine save only to see the ball bounce of the late arriving Ox and in to the net. It was clueless from Arsenal but surely a direct result of changing so many players at the same time.
The second goal was another disaster. Debuchy had rescued us seconds earlier with a stunning block, but then Kieran Gibbs literally ducked out of the way of the corner to allow a free-header at the near post. If Gibbs had simply headed the ball away, which is his job in there, Zagreb wouldn't have scored their second goal. Gibbs is going backwards and he needs to sort himself out quickly.
At 2-0 down nothing changed for another ten minutes! Finally we saw Walcott, Campbell and Coquelin introduced, but still we played with one man in attack. Joel Campbell was again stuck out on the wing and he failed to get in to the game. However, I couldn't believe the stick the lad was getting online as Mesut Ozil played yet another of his anonymous games of football. There we were, on the back foot, and our £40m superstar was nowhere to be seen. Why was he not the man getting on the ball and making something happen? The fact is that he is totally disinterested. As with those who will defend everything Wenger does, there are people who refuse to criticise Ozil and would instead choose to have a pop at a lad who hasn't played football since last season and who Wenger would have sold if he could only have found a buyer. When we did get a goal it was predictably created by the tireless Alexis and put away in good style by Theo Walcott. We got that goal with more than ten minutes to play, plus injury-time, and then never had another shot at goal. Even in injury-time, with the ball wide on the right, we had just Theo on his own in the penalty-area. What was Wenger doing? He was sitting there on the bench watching it all happen.
There is no doubt the players were poor last night. They played badly and the attitude was wrong. But let's not forget that one man selects those players. The same man is responsible for their attitude on the pitch. If they are not up for it then Arsene Wenger is to blame. If the wrong team is picked then Arsene Wenger is to blame. If there are no tactics then Arsene Wenger is to blame. And yet Wenger comes out afterwards and blames the referee. Embarrassing.