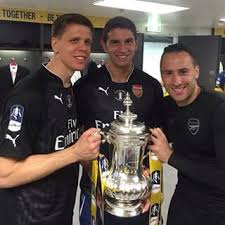 Time for the annual squad review. As with past years it will be in four sections, starting with the goalkeepers. The squad review includes all players that made at least the substitutes bench for the first-team this season.
Wojciech Szczesny
It's fair to say that young Wojciech didn't quite react to the increased competition in the way you might have hoped. The signing of Ospina was clearly meant to challenge the Pole and see if he might be able to step it up himself and meet the threat. In fairness there was very little to choose between Szczesny and Fabianski beforehand, and I'm not too certain there's much between Szczesny and Ospina either.
I have to say Szczesny disappointed me this season. He had all the potential in the World a few years back, but has he actually improved all that much since he came in to the first-team? He put in a number of not particularly inspiring displays before Christmas, albeit behind a defence lacking Koscielny, including a Mertesacker who didn't know what week it was, and no Coquelin in front of them. The Southampton game proved the last straw for Arsene Wenger, and then the smoking incident after the game clearly cemented that decision.
Of course the season finished on a high for Szczesny with his performance in the FA Cup Final, which was in stark contrast to his pitiful display in the semi-final against Reading. With talk of Petr Cech coming in there is a strong rumour that Szczesny might join Southampton for a year while Fraser Forster recovers from a knee injury. A year somewhere else, getting his confidence back, could be great all round and would tell us whether or not Wojciech is the real deal.
David Ospina
The Colombian arrived after impressing at the World Cup but, as is traditional, he also arrived with a serious injury. This meant he started out second-choice and didn't exactly cover himself in glory on his debut against Southampton in the League Cup. When Wojciech made one mistake too many Ospina came in and reaped the benefits of Koscielny and Coquelin being in the side, not conceding a goal in his first few games. In fairness to Ospina he seemed to give the defenders more confidence and he can make a flying save on occasion. However, I'm really not sure he's top class. His lack of height is a problem in the physical Premier League and it cost us a goal against West Brom - in hindsight it was possibly the moment that convinced Arsene Wenger to play Szczesny in the Cup Final against a certain high ball barrage.
I don't know how Ospina will react if Arsene does bring in a quality goalkeeper to take the number one shirt next season. I can see more teams putting him under aerial pressure from the off and I really don't see how he can handle that. It's all very well being a good shot-stopper, but every goalkeeper should be that. To me he's another good goalkeeper, just like Szczesny and Fabianski, but that's not enough for us to win the Title as far as I'm concerned.
Emiliano Martinez
The Argentinian had a few games in the Autumn and didn't let us down. He was eventually dropped following the debacle of a first-half at Stoke City, but he was the last person who should have been getting blamed for that. In the game at Anderlecht he kept us in it virtually single-handed with a some great saves. He is tall and powerful and looks to dominate his penalty area. He was in the Argentinian national squad as a teenager when Maradona was the boss, so has been highly rated for a long time.
Towards the end of the season he was loaned to Rotherham and was instrumental in them surviving relegation. Coming back to Arsenal he was rightly involved with the squad for the FA Cup Final. It seems he might want to move on now and that's probably fair enough. It wouldn't surprise me if he went on from Arsenal to enjoy a really good career. Sadly the timing wasn't quite right for him to come through and be the man for us.
Ryan Huddart
The youngster made the bench for a couple of Champions League games when Szczesny and Ospina were unavailable. He is one of the biggest teenagers I've ever seen but competition among the young Arsenal goalkeepers is ferocious - we have a lot of them and there's not a lot of room for them to get games. Maybe a loan spell to a decent Football League side is what he needs next season. With his size, if he has the agility to go with it, he could end up a real prospect.
Matt Macey
Another of the young crop of goalkeepers, he also made the bench a couple of times. In between there was a loan spell to Accrington Stanley which will have been very valuable experience. I expect more of the same will come next season before a final decision on his Arsenal future.