Not everything Arsenal do is wrong 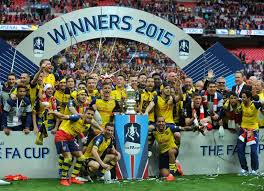 Isn't this what we want to see?


This post might seem a bit hypocritical given the way I go after certain things at Arsenal. But the fact is I am fed-up with people who refuse to acknowledge what is good about our Club. Most of all I am not just fed-up, but utterly amazed at people who would choose to criticise us for winning "only" the FA Cup. If you can't enjoy your team going to Wembley and winning back to back FA Cup's then I suggest you're in to the wrong sport.
This post stems from the overt criticism I saw on Twitter late on Friday night regarding Arsenal's end of season Q&A for fans with Ivan Gazidis and Ian Wright. Among the criticisms were the idea that it was nothing other than a PR stunt (yes, so what?) and that it was ridiculous that grown-ups should want to take up the invitation to meet Wrighty for a photograph, or to have their pictures taken with the FA Cup. Unlike the invite-only kit launch last Monday the event on Friday was actually for the genuine fans rather than those with a big social media profile. Those that didn't get invited to either of them had their axes out on Friday night and were grinding them  with merry abandon. Most of them say they "wouldn't be seen dead" at such an event, but my God did they moan about it regardless! For my money, giving the fans the chance to meet a hero or two (Paul Davis and Martin Hayes were among the others in attendance) and to get up close and personal with the FA Cup for free is praiseworthy from Arsenal. You see, not everything Arsenal do is wrong. Not everything Ivan Gazidis does is wrong. Not even everything Arsene Wenger does is wrong for God's sake!
Off the back of the griping described above I got in to a Twitter conversation with another fan trying to put his point across. Of course I am long nailed to the "Wenger-out" lobby so I share some views with the person I was talking to. We also agree that leaving Highbury "to compete" was a lie we were spun. However, I support Arsenal Football Club. I can do that without worrying that The Emirates isn't Highbury. I can do that without wanting Arsene Wenger in charge (more on that below). I can do that without liking Stan Kroenke being the largest shareholder, and putting his son on the Board. I can do that without liking the fact that my season ticket is bloody expensive. I can even do that when the team is rubbish, let alone when they are winning trophies. You see Arsenal is bigger than any of the rest of it. And it seems that this is what some people forget.
The most bizarre aspect of this conversation came when I pointed out that people wanted to celebrate winning the FA Cup as it means we are being successful, and that you might as well as enjoy it while you can as you never know how long we'll be without success in the future. I was told that the Club are trying to re-create "1979" levels of euphoria over a trophy that doesn't mean so much anymore. This is, of course, utter nonsense. Silverware is silverware. Having spent nine years going mental at Arsenal and Arsene Wenger for not winning trophies it now seems that we are winning the wrong ones! Because it isn't the Premier League we should not be enjoying the win, apparently. I was staring at my iPad screen in disbelief as I read this stuff. And let me make it clear - the FA Cup means as much to me as it ever did. Anyone who was at Wembley on 30th May would say exactly the same thing.
So what is the cause of this negativity? Ultimately it comes down to wanting Arsene Wenger and/or Stan Kroenke and Ivan Gazidis out. The same people that accuse "Arsene knows" types of fan of believing him to be bigger than the Club now use his presence as an excuse to not enjoy winning things, on the grounds that it isn't the Premier League. In short they are now setting up Arsene as being bigger than The Arsenal themselves by their own illogical negativity. It is beyond crazy that you wouldn't choose to enjoy winning the FA Cup, and then to actually have a go at people who absolutely loved it. It's quite scary that such a pathological mind set can exist among our support.
As I said above I have long been in the "Wenger out" camp. But I have also always said I want him to prove me wrong because, in doing so, he would be bringing success back to Arsenal. Can I forgive the move from Highbury? No. Can I forgive throwing away two or three Premier League Title's by refusing to spend the money that was available to strengthen obvious weaknesses when it mattered? No. At the same time I am able to appreciate Arsenal, under Arsene Wenger, suddenly winning two trophies in two seasons. I am able to appreciate the breaking of the shackles to bring in stars like Ozil and Alexis two years running. Do I want Arsene to go now? That's where the change is for me. I daresay a couple of defeats, or another failed transfer window, and I'll back on the campaign to have him removed. But for now I am willing to give him the chance to go out and win more trophies next season and keep proving me wrong. This is because I am an Arsenal supporter and, as I said above, Arsenal is bigger than any of us. I'm not ashamed to say I love watching Arsenal win trophies. And if loving winning trophies is wrong, then I don't ever want to be right.