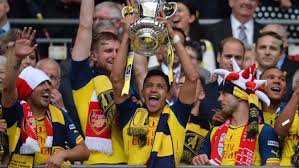 I wonder what award he will get...

I thought about doing this kind of piece last year but then never got around to it before it was too late to bother. It's just a bit of fun, with me giving out some "awards" based on Arsenal's season.
Player Of The Year
This one isn't difficult. Quite simply it is Alexis Sanchez. Since the little Chilean arrived he has lit up the Arsenal team. He scored the goal that qualified us for the group stages of the Champions League back in August and then went from strength to strength for most of the season. I have rarely, if ever, seen a player with his ability that does so much running and who is prepared to do the "ugly" side of the game. He tracks back, he tackles, he wins headers, he's strong, he's brave, he's full of skill, he can hit a football like a rocket, he can sniff out a finish in a tight penalty area. As debut seasons go it has to be the best an Arsenal player has had since Patrick Vieira, or maybe even Ian Wright. What an impact he's made. You can criticise the fact that he comes inside too much when you'd like to see him go on the outside occasionally, or that he doesn't always release the ball as quickly as the other players, but you can't deny he has added something we didn't have before. His goal last weekend simply summed up his brilliance.
Most Disappointing Player
Sorry to follow something positive with this, but I have to shoehorn it in somewhere. I can see why some might look at Aaron Ramsey following his stellar season the year before. There is also a shout for Wojciech Szczesny who failed to live up to the challenge laid down by the signing of Ospina. Maybe Kieran Gibbs hasn't quite kicked on. But for me, and regular readers will know what's coming here, it is Mesut Ozil.
Sadly Ozil hasn't done enough to live up to a £40m+ transfer fee. There have been highlights - the home game against Liverpool and his imperious FA Cup Final performance (one of THE great individual displays from an Arsenal player in a Final) but they were the exceptions to a disappointing rule. Hopefully the FA Cup Final is the turning point for Ozil as he is genuinely that good. If he performs regularly as he did last Saturday then we will see some player once again. But for this season he has been, generally, a frustration to me. 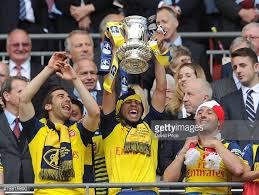 Surprise Package
Only two contenders here for me and they are Hector Bellerin and Francis Coquelin. The difference in Bellerin from the lad who played in Dortmund to the one who played at Wembley last week is astonishing. But the winner has to be Coquelin. It's true to say that Arsene Wenger got lucky with injuries to Arteta and Flamini in that he had to bring Coquelin back from Charlton - two weeks later and he might have left Coquelin where he was and signed a new player. Some of us have been admirers of Coquelin for a few years, never quite understanding what he had to do to get a run in the side. He looked gone forever when sent to The Valley, but his return was the piece in the jigsaw that this side has been missing for a long time. His discipline in front of the back four provides an extra layer of defence that allows the forward players (and the full-backs) to attack more effectively without leaving us short on the break. Tackling, pace, aggression, and an eye to occasionally pick a fine pass are the hallmarks of his game. I want to see us bring in someone who will genuinely challenge him for his place next season, but Arsenal might just have stumbled upon the new Gilberto.
Most Improved Player
Many would look at Coquelin for this but I don't see how we can judge him given his lack of first-team games in the couple of years before this one - to all intents and purposes this was his first (half)season as a first-team player. That being the case it has to be Nacho Monreal. The Spaniard was forced in to covering for an injured Laurent Koscielny early in the season and was unfairly criticised in some quarters, despite the fact that he was carrying Per Mertesacker throughout that time (and Mertesacker admits that himself). Nacho has emerged from his spell in the middle as a better player. His positioning is better, he looks a yard quicker, and going forward he has shown himself more capable than Kieran Gibbs. He is currently first-choice on the left of the defence as of right. He's had a great season. 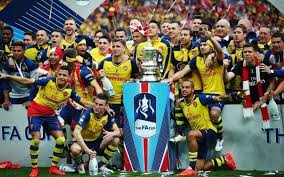 Best Team Performance
Given that I sat through some utter dross this season this is an easy one for me. Yes there has been the odd high spot, but only one game has seen us totally dominate a side for the whole 90 minutes. Of course it came last week at Wembley. It was the complete performance from this Arsenal squad of players. I couldn't quite believe we were that good on the day, so I've watched it on TV a couple of times since just to make sure. The fact is that the FA Cup Final performance from Arsenal was one for the ages.
Worst Team Performance
After the Lord Mayor's Show of course...and there were plenty of stinkers to choose from, especially before Christmas. The absolute stand out has to be the game at Stoke City. In the second-half we nearly got back in to the match, but the way the players capitulated before half-time was criminal and the whole team (barring Emi Martinez in goal) should have been ashamed of themselves. Thank God we never got quite that bad again this season, though we were close on several occasions. 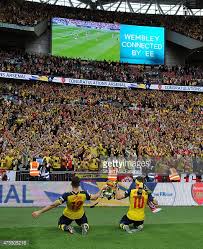 The North Bank Wembley
Best Celebration (for the fans)
There are three contenders here for me and they come from two matches. Of course there are the first two goals from last week, and the other is Podolski's last minute winner at Anderlecht following a stinking performance from the team. Having been at Anderlecht I have to say it was some scene of utter mayhem in the away end, but I can't look past Theo's goal at Wembley as the winner here. The Arsenal end simply erupted when Theo smashed that volley into the net in front of us. It came just as we were thinking the missed chances might cost us badly. If Anderlecht was mayhem, then Wembley was nothing short of undiluted happiness. Nothing beats a big Wembley goal celebration, does it?
Goal Of The Season
Again there are three options for me here. Two of them come from the last 7 days of the season. Jack's official Match Of The Day award winner was a special strike, and Alexis' rocket at Wembley was even better, especially taking in to account the occasion and the significance of the goal. But the winner for me has to be Aaron Ramsey's wonder strike at Galatasaray. To hit the ball with such power, with his weaker foot, in to the absolute top corner of the goal was absolutely incredible. Had it been scored in a Premier League game it would surely have won that BBC vote. You can't get enough of seeing a goal like that, so here it is again!