Media latch on to Wenger Out - it's all his own making 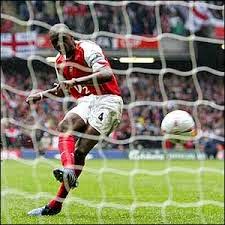 The moment it all started to end

BBC 606 tonight went big on Wenger Out. The media bandwagon has had the brake released and that is a very bad thing for Arsene Wenger. Kroenke and Gazidis can find it very easy to ignore the fans, but they won't be able to ignore the media. If there is one thing that's going to be bad for business then it's bad PR. It gives me no pleasure to see the beginning of the end finally going public as it means that Arsenal and Arsene Wenger are doing badly. But the beginning of the end it surely is.

If you look back, everything started to go wrong the day Patrick Vieira took his final kick of the ball for Arsenal. For some reason Wenger decided to sell him in the one close-season when he seemed absolutely certain to stay. Ever since that day the decisions of Arsene Wenger have cost Arsenal points and trophies. Jens Lehmann was dropped and then forced out. Gilberto was forced out. Ashley Cole, for all that we dislike him for what he did, was let down over a measly five grand a week. Robert Pires was sold in favour of keeping Alexander Hleb as the alternative. Thierry Henry was sold because Wenger had lost the ability to motivate him to play for Arsenal, and who could really blame Henry when he was suddenly surrounded by mediocre players and Cesc Fabregas? The fact is that Arsene Wenger has destroyed everything he created at Arsenal.
How can we go from the Invincibles to what we have now with the same Manager in charge? I can't accept any notion that Wenger was lucky back then with the players he had. He brought in each of those players to the Arsenal side, with the exceptions of Bergkamp and Parlour. The Invincibles was Arsene Wenger's team more than any of the previous successful sides he had at his disposal when Seaman, Adams, Keown, Dixon etc were still in harness (yes, I know Keown was also an Invincible officially, but he played very few minutes that season). The new stadium is used as an excuse for the sale of the top players, but Wenger insisted on moving from Highbury. Nobody can tell me that leaving our home was the right thing to do when you look at a Club suffering it's worst start to a season in 32 years. There appears no way out of the spiral now, just as there wasn't when Terry Neill was sacked, and also when George Graham was sacked. The similarities with the end of those two reigns are so clear, with a squad of players who should be doing far better than they are, but led by a Manager who has lost them and lost the plot.
Posted by DvbrisG at Sunday, November 23, 2014