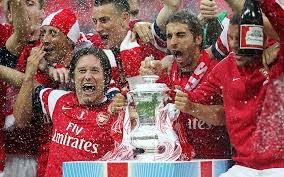 
Four years ago yesterday I wrote the first entry on this website. It was just before the World Cup was due to begin in South Africa and it said a little about me, and “reported” the sale of Philippe Senderos to Fulham. Over the next few weeks I did bits and pieces on the World Cup, concentrating on the Arsenal involvement in the tournament. It was a decent one for Arsenal interest with Van Stapleton and Fabregas going all the way to the Final. The rest of the void was filled with the dreaded transfer gossip that I now ignore so wilfully (at that point there was a chase on for Joe Cole and we seemed to be right in it – it was how that turned out that led me to the decision that I would never again deal in such nonsense).
Having come round the World Cup cycle completely since I began it seems a good time to reflect a little on how the site has evolved in four years.
Over the course of the first year I fell in to the pattern of match previews and reports, and I tried to deliberately make it my opinion of things – that was the idea behind the site, after all. As I had said on the first post, I wouldn’t be writing every day, and sometimes it wouldn’t be about Arsenal or even football (I’ve done posts on stuff as varied as the Olympics and the Royal Wedding). A very limited number of readers rose beyond my comprehension with the addition of the website to the NewsNow Arsenal page. Shortly after that I created a group on Facebook (now refined to a “page” where users can hit the “like” button and feel free to comment how they see fit) and took to Twitter as @ARSENALDvbrisG.
Thanks to the site and the social media a whole new group of Gooners has opened up to converse with and swap opinion on all sorts of stuff. I realise that adding comments on the site itself requires a Google account and most can’t be bothered to do that (I don’t blame you as I wouldn’t bother if I were you) but that’s where the Facebook and the Twitter followings will hopefully grow over time.
This site will never be one of the “big” Arsenal blogs. I don’t spend money on it and I don’t make money on it. I also get no recognition of its existence from Arsenal – I am not invited to the events that others are and I am not featured on the official website. What I do, I hope, is provide something a bit different by not “reporting” stuff but by being forthright. The pieces I enjoy writing most are recollections of past Arsenal events and I hope all the stuff is fairly enjoyable to read. Obviously the most enjoyable thing to happen, and to write about, since I started was winning the FA Cup last month. You can never get enough of that feeling and I hope for much more of it in the very near future.
Here’s to another World Cup cycle.

Just a quick note to ask anyone who hasn’t yet done so to please visit www.onlinegooner.com and complete the Gooner Survey (it closes tomorrow!) In particular, if you enjoy the site and/or follow me on Twitter please answer the appropriate questions with answers that involve myarsenalopinion.blogspot.co.uk and my Twitter handle as shown above. If it gets some more publicity for the site then I’d be grateful to you.
Posted by DvbrisG at Monday, June 09, 2014