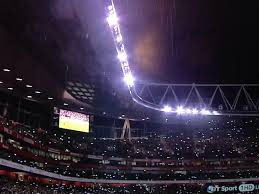 Most entertaining part of Friday night


I was able to enjoy the Coventry game in the company of my eldest son due to the absence of my Dad who has had a knee replacement this week. Despite the seriousness of the operation he is still expected back at Arsenal before Abou Diaby makes his return. In fairness I think the second coming of the Messaiah is expected before Abou Diaby’s return. As it was, my boy predicted a 4-0 Arsenal win on the night and we got on that at 6-1 which provided me with some happiness when Mesut Ozil summed up yet another insipid display with an awful last minute miss.
As you may have guessed from that paragraph of rambling, metaphor and moaning I didn’t much enjoy a game in which nothing much happened for large periods. It was too easy for our players but I could have done without their making it so obvious to everyone with yet another awful second-half stroll. It would have served them right had the disinterested messing about cost Arsenal a goal at some point after half-time. Certainly Coventry ended up deserving a goal for their willingness to have a go at an Arsenal team so relaxed that I think some went for a lie down on occasion. Certainly Gibbs, Jenkinson and Oxlade-Chamberlain seemed determined to create opportunities for our inferior opponent, each of them feeling the sharp end of the BFG’s tongue at one time or another.
Nicklas Bendtner got a start up front and got his usual shellacking from the muppets in the crowd. These are people who cheered a pitch invasion from some fat p***k from the away end at a time when we were going through on goal, thus preventing a goal scoring opportunity for Arsenal. Who are these idiots and why do they turn up? Regular readers here will know I often feel sorry for Bendtner, and so it is again. When he played against Chelsea in the League Cup he was hammered for not doing enough to get in the game. Last night he was doing all he could to get involved and, though I’m clearly in the minority, I thought he did well on the ball for the most part. Obviously people have focussed on his air-kicks, but that’s perhaps what happens when you’re trying to do your best, but trying just a bit too hard. Bendtner’s running last night meant he was absent from where he needed to be when good balls came in to the box (which happened quite a lot on the night), but I feel that the lad can’t win. If he stays in the middle and doesn’t get involved he gets dogs for not trying. Work hard and he gets it for not scoring.
Personally I would rather not focus on a player who we all know isn’t really good enough, and hasn’t been for a long time. I would far rather point our the fact that we have a £40m superstar who has done nothing in games for weeks on end. Last night Ozil managed to be just about anonymous against a side from the third division. I’m sick of reading stuff from people who want to talk about his “style” and how this seems to excuse him from not putting in any effort and not playing with any desire whatsoever. I am fed up with it. These were no doubt the same people who used to tell us that Arshavin wasn’t lazy and that he was being badly used by the Manager. The fact is that we paid an incredible amount of money for a player who looks scared of his own shadow 90% of the time. We all know how good he is, and that’s what makes it so damn annoying (just as it did with Arshavin). A £40m transfer fee seems to make a player undroppable. Perhaps a kick up the backside might do Mesut Ozil a bit of  good.

Here is a link to the last piece I wrote, a week ago, on why Santi Cazorla should come in for Mesut Ozil. For some reason it never made it on to NewsNow.
Posted by DvbrisG at Sunday, January 26, 2014