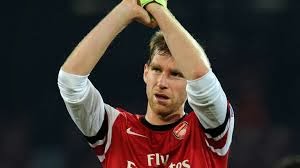 I took some stick from one or two people on Twitter last night for calling our second-half display "disgusting". I stick by what I said. For the first time since we played Villa on the opening day the Arsenal players decided it was all to easy. Villa were so bad that Arsenal forgot the need to kill off their opponent. You should never give a sucker an even break, yet the lethargy of too many after half-time last night allowed Villa to grab a goal they didn't deserve, and a chance to gain a point that could have been catastrophic to our Title challenge. It was a real return to the poor attitude that was displayed all too often over the previous couple of years. The minute you decide the opponent is so beneath you that merely going through the motions is enough then you are in trouble.
Despite Villa's lack of genuine threat you could see their goal coming. Too many passes were being played carelessly. Too many shots were being allowed on Szczesny's goal, albeit not altogether threatening. What it was leading to was a growing sense in the home side that they could get in to the game. It was inevitable that they would eventually get their goal from one of those careless passes I mentioned. I felt in the first-half that Cazorla might as well go and sit in the stands for all the good he doing on the pitch. I was very pleased to see Tomas Rosicky coming on, but I couldn't quite understand why Serge Gnabry was the one being given the hook. The only good thing to come out of Villa's goal was the absolute roasting Cazorla got from Per Mertesacker for giving it away in the first place. Not for the first time the BFG showed he is a proper Captain of this side. He should surely be installed as the official skipper.
The first-half of the game obviously saw us get that two goal lead. I felt we started very well and Giroud should have scored from a free header early on - the improvement in Bacary Sagna's delivery from wide of late has been astounding. We got two good goals, with the first one being a tremendous move. Monreal's composure was impressive as he picked a proper pass to Wilshere, rather than just aimlessly playing the ball at the first defender. The second goal was a nice finish from Giroud after excellent play by Jack again. I would have liked to see us go for it more and finish the game off, but 2-0 at half-time was more than acceptable. As I said above it was the second-half that annoyed me.
Mesut Ozil was yet again on the sidelines of most of the action last night. However, he did provide a beautiful pass in behind for Monreal in the build-up to Wilshere's goal. All in all I thought he was better on the ball last night than he has been for a while, though he again passed up opportunities to run at defenders as he does for Germany and did for Madrid. Where he really came in to his own was when we were clinging on towards the end. On three or four occasions the ball was played in to Ozil and he held it brilliantly. He was willing to run in to the channels to receive those passes and one piece of skill saw him hold off two defenders before playing Oxlade-Chamberlain in to the corner. I was encouraged by his play in that final period.
What I don't want to see anymore from Arsenal is that bad attitude that we got after half-time. Finish teams off and you don't need to worry. What we can't have is situations where we're having to suddenly start working harder than necessary when the game should already be out of sight. This side has an opportunity to challenge for the main honour this season. They must not blow that chance by potentially throwing away goals and points against utter dross like Aston Villa.
Posted by DvbrisG at Tuesday, January 14, 2014