Time for Santi to replace Ozil 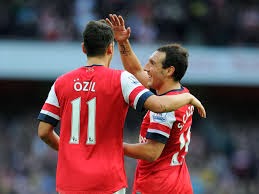 Cazorla is of more use than Ozil at the moment

The game yesterday was going nowhere from an Arsenal point of view until Santi Cazorla took it upon himself to influence the play from the centre. He was eventually moved in to the middle properly when Lukas Podolski came on, with Ozil shifted out wide before finally being hauled off. Such is Ozil's current unwillingness to take any responsibility that he simply must be shifted in order that we can get the best from Cazorla.
I imagine that Mesut Ozil's passing stats from yesterday show a remarkable completion rate. But when you're not trying to do anything even remotely creative or dangerous with the ball then it's easy to generate good stats. I found it increasingly frustrating yesterday that Ozil would get on the ball and look up with a chance to run at a defender or to produce the bit of magic that might unlock a defence, only to then pass the ball out wide to Bacary Sagna. Here we have one of the most highly rated, most creative footballers in the World, yet he wants to pass the ball to his full-back rather than make something happen. Serge Gnabry and Cazorla both took it upon themselves at times to run at a defender and maybe get a shot away (even if it went wide it was at least something different and showed genuine intent). Even Lukas Podolski went at people when he came on (though I've an observation on him below).
I've speculated all season that Santi Cazorla won't be here come August. The presence of Ozil has seen him moved out on to the wing where he has been less than effective. Last season Cazorla was Arsenal's main man, playing behind the centre-forward. He seemed to come to life yesterday when getting himself central. Perhaps he was trying to send a message to the Manager. I don't know if Ozil is struggling to come to terms with the pace and physicality of the Premier League, but his performances right now do not warrant his position as the dominant presence in the team. Cazorla must be moved back in to the middle. It would be a big call for Wenger to shift Ozil from where he wants to play, but it might just be in the best interests of our Title challenge. We certainly can't afford passengers if we're trying to win the Premier League. A £40m price tag brings with it certain expectations. At the moment Ozil is summarily failing to live up to them.
It said a lot about our performance yesterday that I thought Koscielny was the best player on the pitch. He made some tremendous interceptions, nipping in ahead of his man on numerous occasions. In the early part of the second-half it was this sort of play around the halfway line that ensured Fulham couldn't really get any respite as Arsenal kept the ball up there in attack. He should have had himself a goal after Sagna (also impressive) saw one scrambled off the line, but that didn't detract from a dominant display by Koscielny. Mathieu Flamini was also very impressive yesterday, right up until the final minute when he finally lost his positional discipline which allowed the space for Fulham to create a clear chance for Darren Bent. Such lapses will be punished by better quality opponents.
Lukas Podolski came on and looked really up for it. For a whole ten minutes. He got on the ball and ran at people. He looked to create and he looked to shoot. There was one trademark pile-driver that saw a magnificent save from Stekelenburg deny him a goal. But then he stopped. We were going forward at one stage and Podolski was bent over on halfway, hands on knees, looking like he'd just played ninety minutes plus extra-time. I don't know whether he'd got a knock or something but he hardly touched the ball after that. Surely he isn't so unfit that ten minutes of real effort knackered him completely? Arsene Wenger has made veiled comments recently regarding Podolski and, perhaps, a lack of fitness. For all that he is a top quality player, maybe the German lacks a bit in the hard work stakes (or maybe just likes steaks). It's one to keep an eye on. If he did have a knock then I suppose we'll know when the Coventry game comes around on Friday.
For all that we didn't play especially well at times yesterday we did get another 2-0 win. We are still top of the Premier League despite the billion pound Manchester juggernaut scoring four thousand goals already this season (it certainly felt that way on Match Of The Day last night where they showed FIVE slow motion replays of each City goal). It's another game ticked off. We won't win every match, but then neither will Man City or Chelsea. How will City react when they finally lose a game at home? I keep hearing the word "unstoppable" when the media refers to City, but I remember well how an "unstoppable" Arsenal reacted to losing games a few years ago - it wasn't pretty for a few weeks and too many points were dropped. The fact is that after 22 matches Arsenal are top of the table. Sixteen to go.
Posted by DvbrisG at Sunday, January 19, 2014