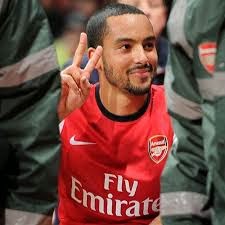 This blog post (the first of this year thanks to work getting in the way of writing) was all set to be a celebration of the win over Tottenham. In the last twenty minutes Arsenal's announcement that Theo Walcott is out for the season has changed not only the content of this post, but also the mood of Arsenal supporters everywhere.
Theo has been making the difference, more often than not, in a lot of recent games. For all that he can still frustrate the hell out of you he is a much improved footballer from the one we were watching two years ago. The pace he has scares the opposition to the point that two men are often detailed to combat him. He may not get the credit (or, more importantly, the service) he should when playing for England but there is no doubting his importance to this Arsenal team. We have more capable and more skilful footballers than Theo, but we do not have anyone to compare to him in terms of speed. He has developed the knack of running in behind defenders and stretching them, never more in evidence than on Saturday when he utterly destroyed Dawson and Chiriches. Serge Gnabry is a prospect, and Alex Oxlade-Chamberlain is already a top player. However, The Ox has not played since August and we still don't know when he's really likely to play again. Even when he does make his return there is no guarantee of him showing any kind of form.
It's so frustrating that we get these injuries. No other team gets the bad luck Arsenal do with senior and key players picking up long-term knocks. This is something that goes back years. Just think back to Robert Pires, Freddie Ljungberg, Lauren, Abou Diaby, Eduardo, Tomas Rosicky, Robin Van Persie, Aaron Ramsey, Bacary Sagna, Jack Wilshere, Thomas Vermaelen, Alex Oxlade-Chamberlain...the list is seemingly endless in the last twelve years or so. On this occasion it feels particularly cruel. I think a lot of us were just beginning to genuinely believe we have a chance to do something this season. The win over Tottenham was so comfortable that you had to think the players had clicked. For them to then be dealt such a massive blow is huge. I feel absolutely gutted for Theo, gutted for Arsenal, and gutted for us fans.
I said early in the season that I thought Theo wouldn't go to the World Cup. He was out injured and the press were banging on about that muppet Townsend at Spurs. In recent weeks I felt certain Walcott was back as the number one choice to play on England's right-wing. You'd have to think now that his only World Cup will be the one where he was picked before he was anything like ready to be in the squad. I couldn't be more annoyed on his behalf. What exactly has Theo done to deserve such a terrible run of luck?
What it means for Arsenal is that Arsene Wenger must surely now have his hand forced in the transfer market. Giroud is on his way back, but he is genuinely on his own now. Lukas Podolski is not an option through the middle in the formation Arsenal play. Arsene's comments last week show that he doesn't even really count Ju-Young Park as part of his squad (despite naming him on the bench on Saturday). With Nicklas Bendtner out until February, and Theo gone for the season, we must make a signing. It can't be a stop-gap type of player now either. I would have been relatively happy with someone like Berbatov, but now it must be a top class centre-forward as the goals of Theo have to be replaced. We're not even sure how long Aaron Ramsey will be out for, so we are suddenly very short of people who put the ball in the net. If it means making another massive money signing so soon after Ozil then so be it - the chance to win the Premier League depends on it.
Get well soon Theo.
Posted by DvbrisG at Monday, January 06, 2014