Where is the excitement? 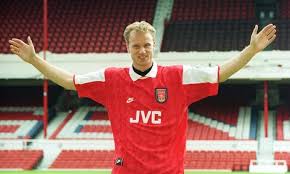 Remember this?
The new season begins this Saturday. Normally this is the most exciting time of the year for a football supporter. Everyone starts from the same point, and the next nine months will bring joy and thrills and despair and disappointment. It's the reason we go to watch our teams. This season I find myself not caring for the fact that we play our first game in four days time. The first game of the season should be played in glorious sunshine, with the new signings taking the stage for the first time in a real game. There is nothing like seeing those new players for the first time, and giving them their own personal reception as their names are announced. I'll never forget the buzz around the ground the first time we saw Dennis Bergkamp and David Platt, appear at Highbury. Even before the Sunderland game last season with Podolski and Cazorla lining up produced a superb atmosphere. Yet here we are with only one new player, a free transfer from the French second division, who looks like he'll miss the start of the season with an injury. It's even forecast to rain at the moment. I am not excited in the slightest. Arsenal have done nothing across the close season to make me look forward to what might lay ahead this year.
The fact is that Arsenal's squad is threadbare and lacking quality, as it was last season. Being short on numbers is really no different from last term. People will point to the number of players that have been sold, but only Gervinho was ever really involved last season from that group. His sale is offset by the arrival of Sanogo and the possible promotion of Zelalem and Gnabry. However, that team last season scraped a dismal fourth place on the final day. Any contention from Arsene Wenger that we can challenge without additions is as empty as it is embarrassing. We all know he doesn't believe that himself, so why come out with such nonsense?
The line up of the players at Members Day last week should have been a massive eye opener. There were 17 outfield players on show, including the two kids mentioned above. Arsene says he has "16 regular players" to choose from. I don't know if he's noticed, but he has to name 18 for every game. With Miyaichi, Rosicky, Sanogo, Monreal, Vermaelen and Diaby all crocked at the moment, and Walcott and Ramsey picking up knocks too, you'd have to wonder what planet the Manager is on in not adding to his options.
One of the things Wenger has claimed is that the transfer market has been slow for everyone. That is a lie. Manchester City and Spurs have signed players. Other big Clubs around Europe have signed players. Liverpool have signed players. To say that nobody has done business, just because Chelsea and Man Utd haven't, is crass and insults the supporters own intelligence. We have wasted the Summer months chasing a player I don't think we can buy. We could have had Higuain in place already. We could have had Fellaini in place. We could actually have had Wayne Rooney had we offered the same to Man Utd for him as we offered to Liverpool for Suarez. As it is we have two goalkeepers, neither of whom are good enough. We have two fit centre-backs. We have no defensive minded midfield player, with Mikel Arteta's professionalism getting us out of trouble for most of last season. We have one centre-forward. The gaps are obvious to everyone. Yet we've seen no movement to address the issues.
The Champions League qualifier looms large on the horizon. Olivier Giroud has been superb in pre-season and has to play. So what happens if he gets injured on Saturday against Villa? We will be going to Turkey with either Podolski or Walcott playing the lone striker role. The evidence that neither player is genuinely capable of doing that job is overwhelming. Considering that the last season finished three months ago it really is negligent to allow ourselves to be gambling like this.
Those that would choose to defend Wenger and the lack of transfers have gone through their full list of annual excuses. We are now on to the final two. The first being that "he's waiting to see if we get through the Champions League qualifier" and the second that "the transfer window doesn't close until September 2nd". Neither of these has any merit. In terms of the first one it is obvious that strengthening before the qualifier gives you a better chance to actually get through. The second is a joke when you consider that the season starts this week - we will be well in to the season by the time we get to September. Let's just say we drop four or five points (or worse) in the first few games, before doing our late transfer business, and then miss out on winning the Title by three points, or fail to get through in the Champions League. Would it not have been worth doing business a little earlier? There simply is no defence when everyone knows we have so much money available.
I'll leave you with one more thing of major concern. There has been a rumour bubbling under for the last couple of months linking Arsenal to a £4m move for Gareth Barry. He is out of favour at Manchester City. He will be available on the cheap. He would be a typical Wenger signing, designed to annoy everyone who wants money spent. In short he would be the new Mikael Silvestre. I would not be surprised to see it happen. And that doesn't fill me with excitement either (especially as Mathieu Flamini is currently training with Arsenal and available on a free - who would you sign?)