Arsenal make a signing to get the blood flowing 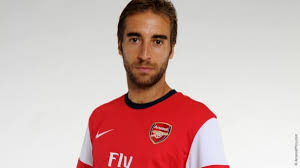 A signing! A new player! Can you feel that excitement? No, neither can I. All I can feel (and see) is resentment from Arsenal supporters at the arrival of yet another player for free. It's all a little unfair, maybe, on Flamini and I'll address that below. However, it is a symptom of the way this Summer has been for Arsenal fans that Flamini has not been so much welcomed as dismissed. Surprisingly the reaction has largely had little to do with the way he walked out after playing well for three months of his previous Arsenal career.
With the squad situation as dire as it is we should be lauding the arrival of Flamini. Here we are getting a player who always gives 100%, likes a tackle, and can play in three different positions. He provides us with quality cover and the sort of grit and needle that we've been sorely missing. In the absence of Mikel Arteta he is a player who has the discipline to protect the back four, albeit not the out and out top class holding player we really want. The fact that he hasn't been welcomed, as such, is simply down to the failure to bring in top class players for big money. If we'd signed, for example, Begovic, Fellaini, Higuain and Suarez/Rooney, as well as Flamini and Sanogo I reckon we'd all be very happy bunnies right now. As it is we have only the latter two, both on free transfers, despite being told by Ivan Gazidis that this was the year things would change. Arsene Wenger has simply ignored that and carried on his merry way.
Our transfer business has been a joke. There has been no apparent plan. There has been no strategy. What exactly are we trying to bring in? Is Wenger after a striker? Does he realise the need for a holding midfield player? Why is he going after yet more creative dwarfs to play in a creative role? There is seemingly nothing coherent about the targets we've chased. As for the way in which the business has been gone about you can only describe it as amateurish. Meanwhile the lies have been mounting up.
Arsene Wenger told everyone that nobody had spent any money. That was a lie. He told us that there were no top strikers available in Europe in this transfer window. That was a lie. He told us Arsenal work 24 hours a day to bring in new players. That was a lie. After all this he then asked the press to tell him names of players that were better than we've got already. That was just plain embarrassing. All of these statements reek of contempt for the supporters. We are the great unwashed, who know nothing about anything.
His favourite soundbite this Summer has been to keep telling us that transfers require the agreement of all three parties. Of course they do. But it's not really that difficult to get that agreement - other Clubs find it very simple. Why? Because they are keen to spend to improve.
The main reason we have been unable to buy top talent this year is Wenger's complete refusal to spend anything above his own valuation of a player. Once he sets his limit that is it. That's why we don't reach agreement with the selling Club. He fails to realise that his valuation is pretty much irrelevant if he really wants the player at Arsenal. The selling Club sets the price. You either match it or negotiate it to find agreement. If you want the player you pay the money. That is all there is to it. Transfers are really not that complicated, I am sure. Certainly the talks are not always honourable, as we saw with Real Madrid's apparent raising of the price for Higuain, but that's the way it is. If we wanted Luis Suarez we should have gone to Liverpool and made an offer they couldn't turn down. Instead of that we messed about thinking we were being clever. The end result was that we didn't get the player. Whatever my views on David Dein you can not deny that he got business done, usually with the minimum of fuss, and the minimum of publicity. It is a shocking state of affairs and Arsenal's men that matter should be ashamed of the balls-up they've made of it all.
By the way, welcome back Mathieu.
Posted by DvbrisG at Thursday, August 29, 2013