Giroud will be a big miss, AISA strike the right note on Van Persie 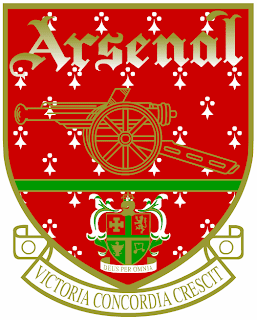 A mark of class

Olivier Giroud will miss the next three games after his appeal against his red card at Fulham failed. I said in the match review that I thought it was a little harsh, but after Sidwell had gone off he was always going to get sent-off himself. I wasn't surprised to hear Arsenal were going to appeal. Giroud is the only proper centre-forward in the squad so to miss him for three games at such a crucial stage is huge. I don't subscribe to the idea that some "fans" seem to whereby they're actually happy he won't be playing. Giroud may be a bit more Lee Chapman than Alan Smith, but he is being unfairly compared to the man who went before him. How exactly was he supposed to replace Robin Van Persie? Giroud has 17 goals so far in his first season in English football. That's not a bad return in my view. He plays up front with little support most of the time. In a front two he would look a far better player. The fact is that Giroud is a decent centre-forward. If he was the reserve to a genuinely top class player he would get far less stick from the crowd. Thanks to the Manager not bringing in somebody else in January (or even last Summer) we are now left with a choice of Walcott, Gervinho or Podolski up front on their own. We've been there earlier in the season, and it wasn't wholly successful. Without Giroud we could be a bit toothless.
I suppose we shouldn't have been surprised that the FA chose to uphold the suspension of Giroud. After all, he plays for Arsenal. You might recall that earlier this season Vincent Kompany had a red card at Arsenal overturned because he said he had slipped in making the tackle. Even taking that in to account his challenge was far worse than Giroud's last week. Arsenal mounted a similar defence for Giroud's appeal. There is clear evidence of his standing foot going away from him as he moves towards the ball. For some reason the FA chose to believe that it was still dangerous from Giroud. I find that bizarre but seriously unsurprising. Arsenal could pay a huge price for his suspension over the next few matches. 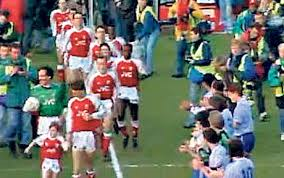 Why Arsenal must reciprocate 22 years on

Arsenal has long stood for class and tradition. On Sunday we will be visited by the new Champions, Manchester United. As is customary, the Arsenal players will form a guard of honour. Of course this is given greater significance by the possible presence of Robin Van Stapleton. I have to say that, with the Title in the bag, the only reason for Van Persie to even travel to London on Sunday is so that Ferguson can create some spice for the occasion. I feel it would be best all round if the former skipper was to rest his weary bones after only the second season of his career.
I am a little shocked that there has even been discussion as to whether there would be a guard of honour. As I said above, Arsenal is about class, and it would have shown a distinct lack of that were there to be no acknowledgement of Manchester United by the Arsenal players. The supporters will each make their own decision whether or not to applaud. I suspect the majority will be entirely ambivalent to our opposition with little applause, a few turned backs, and a fair bit of booing (especially if he is taking to the pitch with his new friends). I think AISA have captured the mood pretty well, with the following from their Chairperson, Lois Langton:


"I think we have to give the guard of honour, as I don't want us to look as though we are being petty by not giving the guard of honour. For it not to happen would actually boost Robin van Persie's ego. I would rather us just acknowledge them and then get on with the game - otherwise the focus will be on Robin van Persie, rather than the Arsenal team, which is what we are supposed to be going there to support.
Having said that, the reality is he will get a hot reception. Football is a game of passion and emotion, and there are a large amount of supporters who feel very strongly about the circumstances in which Robin van Persie left. We had the seven years of him being injured with us, then he had his one injury-free good season, and at the end of that he decided to leave. The statement he came out with when he left, which I think he felt showed he identified with supporters, actually showed how very far removed he was from supporters. He completely called it wrong, he did not appreciate how Arsenal supporters felt about him and about the club. He alienated himself from supporters by the way in which he brought about his move, that is still felt very strongly by Arsenal supporters and is what is going to generate the response that he is going to get when he comes back on Sunday.
He has also not been terribly respectful towards Arsene Wenger, with the celebration after he scored that penalty (against Stoke), when he ran over to the touchline and embraced Alex Ferguson. It sends out a message that Arsene Wenger has not been the one who brought him to the stage he got to now, recognising who got him to where he is today. When he came to us he was a slight persona non grata in Holland, where he had difficulties at Feyenoord. It was a risk buying him, and without question Arsene Wenger has made him into the player he is today."
Lois goes to just about every game, home and away. It is no surprise that she has spoken the words that probably sum up the way most Arsenal supporters feel about the return of Van Persie and how the guard of honour is a mark of the Club that gives it. Basically, it's a case of "well done on winning the Title, now let's unleash the hounds of hell on that treacherous little scumbag who tried to make out he was one of us". It promises be very interesting if he turns up.
Posted by DvbrisG at Thursday, April 25, 2013