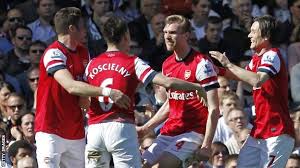 
In all honesty that was one of our very worst performances of the entire season, and there is plenty of competition in that regard. However, unlike the games at Man Utd, Norwich and Bradford, and at home to Blackburn, we emerged with a win. It wasn't pretty and I'm not entirely sure it was all that effective, but a win is a win is win, and the three points could be huge in a few weeks from now. We've long wished for this side to be able to play badly but scrape a win and today was certainly that. I don't know what the match stats might show but I honestly don't remember Mark Schwarzer making a save in the game. That we scrambled a goal through Per Mertesacker, despite being outplayed by ten men for large periods of the game (especially after half-time) is a massive bonus.
I don't know what was wrong with them today but the players were really lacking. I suppose Arsene might point to them having played three times this week, but that's what they're paid for. It also hasn't been a team without rotation in those three games - only Arteta, Ramsey, Sagna, Cazorla and Giroud have started all three, and only two of those have finished all the matches. We were laboured throughout, while the passing was as bad as you will ever see from an Arsene Wenger team. At times our inability to retain possession during that second-half was nothing short of embarrassing. You really would have been hard pressed to tell which side was down to ten men for 80 minutes.
As far as I'm concerned only two Arsenal players emerge from the match with any credit, and that is the two centre-backs. I suppose it was fitting that they should combine for the only goal with Koscielny's mis-placed header back across the six-yard box nodded home by "sniffer" Mertesacker at the far post. Koscielny won just about everything played in the air, and there was plenty of that from Fulham at times. Mertesacker, meanwhile, shackled Berbatov pretty well and read the danger at just about every turn. Without Mertesacker and Koscielny we wouldn't be celebrating this evening. Nacho Monreal had a really tough day today and most of the problems were coming down his side in the last half-hour. Quite why Cazorla wasn't replaced by Kieran Gibbs with twenty minutes to go I can only wonder - Monreal needed someone in front of him who would help out defensively. In the final minute, however, he made a crucial intervention in the six-yard box to deny Fulham a certain equaliser. These are fine margins, and we stayed just the right side of them today.
The injury that Grant Holt inflicted on Lukasz Fabianski last week (no action taken by the FA) may yet cost us dearly. Szczesny made one of two decent saves, but he was nowhere when we needed our goalkeeper to take the pressure off late on. He was also saved by a correct offside flag when he did his usual of pushing a free-kick straight out in front of the goal for an onrushing forward to score. It happens too often with Szczesny - he simply isn't good enough. By the way, Sian Massey was the linesman (woman) who gave the offside and I honestly don't think there is a better official than her in the Premier League.
The two red cards looked slightly similar. The difference was that Giroud had no malicious intent and his foot rolled over the top of the ball, making it look worse than it was. Sidwell, meanwhile, went in to hurt Mikel Arteta - he had no intention to play the ball whatsoever. His reaction of pretending to be injured himself was that of a man who knew he was about to be sent off. With fouls like that I can see Stoke enquiring as to his availability this Summer. Having sent off Sidwell there was no way Andre Marriner (who I'm convinced had another spray-tan at half-time) was going to let Giroud off. It probably wasn't a red card, but there is no way the FA will let him off on appeal - he plays for the wrong Club.
The three points today puts us in front of Chelsea and five clear of Tottenham. With the games we have left to play that was a big win for us. If Man City can beat Spurs tomorrow they will be in real trouble, especially as they also have to play Chelsea. Our last four games are tough. I know our last three opponents are all near the bottom, but that gives them something to play for against us other than personal pride. Next up it's Manchester United and Frank Stapleton Mark II. It's never easy, is it?
Posted by DvbrisG at Saturday, April 20, 2013