A good man lost to us 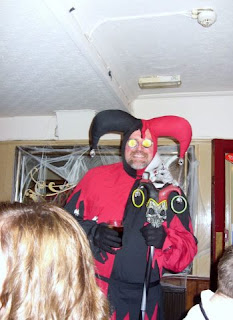 The familiar smile of a popular bloke


My intention for the blog today was to reflect on a hard-fought 0-0 draw with Everton, and then to reminisce on the events of 20 years ago today when Steve Morrow gave us one of our greatest days at Wembley. However, this morning I received the awful news that a work colleague, friend, and big Gooner had been killed last night in a car crash. As a result I want to pen my tribute to a top bloke.

I first met Keith Hall when he came to work in the same office. We quickly found we had a common interest in Arsenal and, as with many other people, it was that which would form the starting point of many a conversation. Whenever I would bump in to Keith we would find ourselves discussing the latest results, the way the boys were playing, who we needed to sign etc. It was always a pleasure to talk Arsenal.
Keith was a big man. I suppose he wasn't the sort of bloke you'd fancy upsetting if you could help it, simply because of his size. Indeed, I saw him react a couple of times on the football pitch (we played for the office side together) when someone tackled in a way he didn't like. He meant no malice, he just wanted to get home to the family with his leg in one piece. Keith was also forthright in his opinions - something I certainly appreciate, as you can imagine. If Keith didn't agree then he was definitely not shy in telling you his own view. However, I think most people who came in to contact with him would concede he was really a gentle giant of a man, certainly more smiling than frowning was going on when the big fella was about.
Keith was almost always smiling when you met him, always quick with a joke and a bit of banter. He had a familiar grin and a laugh that everyone would instantly recognise as his. He was also no mean battler at centre-half - not many got past the big man at the back. Affectionately known as "Gatt" (he looked uncannily like Mike Gatting) he was a good player.
When we started the Dover Gooners Keith and his father-in-law, John, soon became members. Keith would always turn up at members events, whether it be the AGM or a social occasion. Keith's face was a regular, friendly and popular one at the annual dinner. The last time I got to speak to him was at last years Legends Dinner. Our work lives have taken divergent paths so I rarely came in to contact with him professionally over the past couple of years. When I spoke to him in October he was the same old Keith, smiling and laughing. On reflection it was a conversation I'm grateful to have had.
Another feature of Keith was that he would always ask after the family. Our wives had become pregnant around the same time and that became another common talking point for us both. We would regularly run in to each other when shopping at the local Tesco and Keith would never let you go until he'd asked after your health, and the kids, and the wife, and The Arsenal. I was privileged to have been to his 40th birthday party a few years ago, and the number of friends there was a testament to the popularity of a genuinely nice family man. The hardest of all this is that he leaves that family and large group of friends behind.
There was a time at work when we were all under a great strain. Things were happening that led to an industrial dispute and, following that, the dismissal of some colleagues. I was proud to stand on the picket lines with Keith. He was always there and it was a genuine privilege to be able to look one another in the eye, knowing that we'd done our bit and stood up for what we believe was right. I won't forget his loyalty and solidarity.
I'll leave you, if I may, by quoting another friend of mine (and regular contributor to the comments section on this site) with his tribute to Keith from today. I hope Malcolm doesn't mind me borrowing these words, but I don't think anyone could possibly put it any better:

"An overused term is gentle giant, but not today. Yes he could be stroppy but aren't we all at times? He said what he thought and was true to himself. Always asked after the family, and had that laugh of his. Remember him with those rosy cheeks and as a family man. Respect."