Disappointed about Campbell, Thierry being victimised 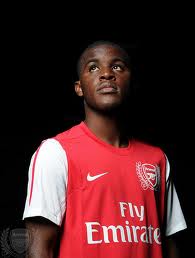 Could this be his only appearance in an Arsenal shirt?


Eleven years ago today we were celebrating the arrival of Sol Campbell at Arsenal in the biggest transfer coup in living memory. Today I am lamenting the fact that his namesake will not be in red and white as hoped.
I was really disappointed yesterday when it was announced that Joel Campbell is about to join Real Betis on loan for the season. Campbell himself described it as "a new adventure" and I certainly wish him luck in La Liga. However, I was really hoping to see a bit of the Costa Rican in the Arsenal team this season. With a number of strikers (hopefully) moving on it seemed certain that Joel would be part of the squad on his return from a year in France with Lorient.
One of the other blogs ran a story last week (I forget which site it was) dissecting the rules for work permit applications in the UK. I know a little about the process myself, and I felt the piece was over-simplifying things somewhat. I don't know whether Campbell has been allowed to go out because a new application has been, or was likely to be, refused but it would not surprise me if that was the case. Either way, it is a shame that this talented youngster will not be at Arsenal when we get started again next week.
Campbell is not the first youngster from his part of the World to be signed by Arsenal and immediately sent out on loan. He is also not the first to be loaned out over a number of years. Before him there have been Carlos Vela, Pedro Botelho, Samuel Galindo and Wellington Silva. All of those players have something in common - none have made the grade at Arsenal. In fact Vela is the only one to ever play for the Club. My biggest fear for Joel Campbell is that he will go the same way as the others and that his Arsenal career is actually finished before it has even begun. In his favour is that he will be in the top division in Spain, as opposed to some second division outpost. If he can force his way in to the Betis team then Campbell will at least have the chance to impress at the highest level. Let's hope he's a revelation.

My copy of the end of season DVD arrived last week and I finally got around to watching it properly last night. You will recall, no doubt, that Thierry Henry scored Arsenal's seventh goal in the home rout of Blackburn. You will also recall that, after the end of the season, the goal was taken away from Henry by the Premier League's "dubious goal panel" because of the deflection it took. I was a bit miffed at the time, and even more so now. In the same game, for example, Mikel Arteta hit a shot that was going wide of the goal but was deflected in to the net - Arteta is still credited with the goal. Then there are the goals we conceded to big deflections - Saha for Spurs and Holt for Norwich. Neither of those was beating the goalkeeper before the deflections that took them in (much like Henry's goal). Having said that the shots were on target, but so was Thierry's against Blackburn.
I was so annoyed last night that I googled the "dubious goals panel" to find out who sits on it. I found that nobody is allowed to know. The only thing revealed is that it is made up, at any one time, of "three people who have either played or officiated at the highest level". According to their criteria it states quite clearly that an effort which is originally on target, before being deflected, will see the goal remain credited to the player taking the shot. Goal attempts that were not on target, but are diverted in to the goal, will be credited as own-goals. So why has Henry's goal been taken away? I can only assume that there is someone on the panel who dislikes The King. Let's face it, he has plenty of enemies among defenders who have been humiliated by his sheer brilliance. There can be no other explanation for such a ridiculous miscarriage of justice. As a result Thierry's all time Arsenal record has been brought down by one goal. Quite simply, this is wrong. Arsenal should ignore the decision of the panel and keep Club records as they were, with Henry credited as the scorer. Maybe we should, as my Dad said today, start a campaign to get Thierry's goal back. What do you think?

Just as a quick finish, I promised to keep you abreast of any writing I did at www.arsenalzone.com . I wrote a piece last week about Alex Oxlade-Chamberlain and Theo Walcott and it's been on the site since then. It's a bit dated now as I forgot to link to it from this site, but you can read it by clicking here. I hope you enjoy it.
Posted by DvbrisG at Tuesday, July 03, 2012