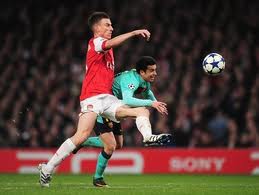 Kosicelny - a big miss for Arsenal


I hope the Arsenal players treat the game tonight with more respect than they did at QPR ten days ago. The way they played on Sunday was a sharp contrast, and the same effort we saw against Manchester City will be required against a desperate Wolves side. If there is any thought, from any of the players, that Wolves will be easy to win against then we will lose the game.
With Laurent Koscielny suspended we will have Johan Djourou back in the side next to Thomas Vermaelen. We all know that Djourou has not fulfilled his potential, and has seriously failed to build on his exceptional form from the middle of last season, when he carried Arsenal's defence. His loss of form has made him one of those targeted by the idiotic side of the Arsenal support and he gets a lot of unfair abuse. This is less likely to happen with the travelling fans than it is with the tourists that populate our own stadium, many of whom get their impressions of the players from the newspapers and internet forums. Whatever the case may be, Djourou will be wearing an Arsenal shirt for the next two games in the absence of Koscielny, and he deserves our support. We all know that we will be weakened by the absence of Koscielny as he has been the outstanding performer in the Arsenal defence this season. Perhaps the rest of the back four will have to concentrate a little bit more without him there.
Elsewhere in the defence Andre Santos is likely to start at left-back in place of the "fatigued" Kieran Gibbs (how the hell do you get tired playing one game per week?) We all know he likes to go forward, but he must choose the occasion to do so more carefully tonight. We don't need any headless chickens at the back, and organisation will be key. We will also need Alex Song to be on his mettle with his primary role of protecting the back four. It may seem a little odd to be concentrating on the way we defend ahead of a game against the side propping up the Premier League, but the fact remains that doing the basics right, and not conceding goals, is what allows you to go on and win football matches.
I don't see too many other changes from the side that played on Sunday. It will be interesting to see whether Yossi Benayoun remains in the starting line-up. With the "adventurous" Andre Santos at left-back it might be no bad idea to keep the hard-working Israeli in the team. If he is left out then it must be Alex Oxlade-Chamberlain that comes in. If Wenger picks Aaron Ramsey to play on the left yet again then it will do nobody any good, least of all Ramsey himself. Gervinho remains on the sidelines with an ankle knock, though there is talk of the lesser seen Ju Young Park being added to the squad. That would indeed be a treat!
Wolves are likely to recall Roger Johnson to the side after he was dropped for their game at Stoke on Saturday. Johnson seems to have lost a lot of form this season. We know how well he can play after his performance in the Carling Cup Final last season. I hope he doesn't regain that form this evening. There is good news for anyone who likes their ankles/knees/skull in the right place with Steven Hunt missing through injury. Up front, in Doyle and Fletcher, Wolves have two dangerous forwards, both capable of scoring goals, with Matt Jarvis a fine provided from wide. Finally, they have an outstanding goalkeeper in Wayne Hennessy. I hope he doesn't have one of those games tonight - he denied us single-handed when we played out a 0-0 against them at Christmas.
I'll write a match review tomorrow morning.