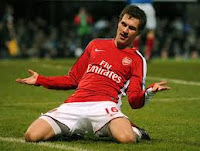 Ramsey - not his fault, so get off his back


I said it would be a tough ask to get a win on Saturday in my preview piece. However, I also said that, if we played our game well then we would get the victory. It is fair to say that we did not play our game well against QPR and we paid the price with a defeat. A lot of stick is being aimed towards Aaron Ramsey on certain internet forums (well, one in particular). I think it's fair to say that the Boyo has struggled for a large part of this season, and his lack of pace has been a problem at times. Having said that, he has been asked to replace the role of Cesc Fabregas for most of his appearances this term, and that is an unfair comparison to make. He was never, perhaps, the fastest of midfield players, but he has lost a certain nip since Shawcross shattered his leg at Stoke two years ago. To criticise him when he then gets played from the left wing, therefore, is unfair in the extreme. Naturally he drifts in from the wide area and this makes us disjointed and lacking any balance. That's not Ramsey's fault though. If we want to point fingers then let's get them aimed at Arsene Wenger. Again. I do not understand why he thinks playing Ramsey on the left, with Chamberlain and Gervinho sitting on the bench, is a good idea. It seems to be some kind of defencive move, designed to help Gibbs in some way. You could argue that it may have made sense to a certain degree up at Everton (though it didn't work, and Arsenal got away with it up there) but against relegation fodder like QPR we should be attacking. Why change your natural instincts against a side that might be heading back towards the second tier? He used to insist on playing Diaby wide on the left, and Gilberto had a spell on the right - hardly successful moves were they? It does Ramsey no favours, and it does the team no favours, so let's hope Wenger dispenses with such stupidity from now on.
Whatever the selection issues it doesn't get away from the fact that the attitude was, yet again, wrong from the players. I got concerned last week when I heard the Manager and one or two players talking about how the game in Milan had been a "turning point" etc. The minute this squad starts to think they've "turned corners" they produce the sort of arrogant and insipid rubbish we got on Saturday. Not for the first time (or the second, or the third for that matter) they had the air of a team who thought turning up would be enough to swat the opposition aside. It's also not the first time we've heard Wenger telling the press that they "weren't good enough." I have to wonder how many times we are going to hear it. Once again, if the players lack the sufficient "mental" qualities, or the Manager is unable to get them necessarily motivated, then it is Wenger who is to blame. I said a couple of weeks back how I was uncomfortable with the assumption among many "fans" that Wenger was God again and that Spurs had been dispatched. Egg is all over their faces once again.
Obviously you can't and don't win every game. I have no problem with us not winning if the players have tried hard and shown the right mentality. You often come up against an inspired goalkeeper, for example. What we get far too often with this mob is a display lacking in those necessary qualities.
One more thing I want to point out is that I have seen Alex Song criticised in a few places after the game for trying to play too many difficult through-balls when there is an easier option available. I can understand that to a certain extent. However, perhaps if the clown alongside him tried to play a forward pass occasionally, rather than choosing the easy sideways five-yard pass every time he gets the ball, then maybe Song wouldn't feel obliged to try for something special quite so often. It annoys the hell out of me that people choose to get at Song while ignoring the absolute fact that Mikel Arteta is the problem. He slows down our attacking play, when pace is our real strength and is what destroys teams (just look at how we played against Spurs and Milan at home), and he never looks to play an incisive pass. Open your eyes people, please.
Posted by DvbrisG at Monday, April 02, 2012